Welcome to the land of Deverry, accounts of which were first published in 1986. Fifteen books and nearly 35 years later the world is expanded again with ‘Sword Of Fire’. 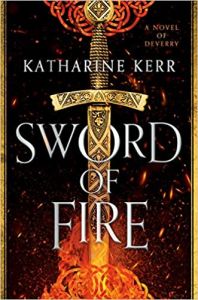 Deverry is one of those series’ that I’ve seen about the place and always meant to get around to reading but never quite got there. In my defence I was barely reading when they first came out and there are a lot of other books to read being published constantly, even for a dedicated bibliophile, so I was excited to read the first book in a new series.

When Cradoc the Bard’s hunger strike goes on too long, his death spurs riots in the streets. A word from Lord Ladoic would have saved him, a promise to hear out the Bard’s grievance that the legal system is rife with injustice and skewed to those of rank and able to afford the bribes to win their case. The lord might side with the nobility simply out of honour and tradition, but the priests who interpret and remember the laws often take the chance to line their pockets. With the Bard’s death, his student’s at the ladies’ academy strive to ensure his death was not in vein. The Lady Dovina, daughter of Lord Ladoic, takes up the political fight in open defiance of her father. Her friend Alyssa, daughter of a baker, is sent to fetch an ancient text that could revolutionise the government by returning to ancient tradition. Not everyone wants change, however, and both girls will need to find allies to protect themselves if they want to change their world.

With the Bard’s death, his student’s at the ladies’ academy strive to ensure his death was not in vein. The Lady Dovina, daughter of the lord, takes up the political fight in open defiance of her father. Her friend Alyssa, daughter of a baker, is sent to fetch an ancient text that could revolutionise the government by returning to ancient tradition. Not everyone wants change, however, and both girls will need to find allies to protect themselves if they want to change their world.

This is a classic swords and sorcery tale. Without much in the way of sorcery. Magic isn’t believed in by anyone educated or civilised, it’s just all old wives tales. Except for those hints, those whiffs of magic that just maybe are the real thing. Swords, on the other hand, are everywhere. As are names of the Celtic variety. So many. I’m sure they mean things and I admit to just letting them wash over me. Some of them became clearer as the book went on. Others remained a blur. All of them are completely out of my head now. But this isn’t a new thing. It’s just that the Celtic style of medievalism shown here isn’t as common at the moment.

These names aren’t sprinkled on for flavour, they are the meat of this novel and it does give a sense of the ancient tapestry underlying the current drama. I’m sure someone who has read the other Deverry novels will recognise many names or places. Perhaps there are even Easter eggs in the text for those loyal fans. I’m not one of them. I had no knowledge before reading this novel and did not feel like I missed anything. Instead, there was a great sense of there being a whole history under the surface that informs the plot but doesn’t derail it.

Medievalism is both the feature and the flaw for me in this novel. The role of the female is the archaic one of the wife, the mother and not much else. Women like Alyssa and her fellow scholars are the exception, not the rule. They are fighting the good fight, though, and their struggle is consistent with the faux medieval setting. Some readers might be put off by this as even the relatively liberated Alyssa struggles with social pressures that dictate how she behaves and what she believes and does not always resist them.

‘Lord Of The Rings’ is the classic high fantasy novel and ‘Sword Of Fire’ is definitely in the same vein, though without the epic poetry, not a Tom Bombadill in sight. If you liked ‘Game Of Thrones’ but found it a little long this might be the new old series for you, with the added benefit of a nice back catalogue to peruse while waiting for the sequel.