‘Stray Magic’ is book one in the Stray series by Kelly Meding. 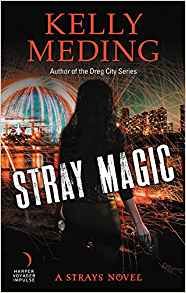 Shiloh Harrison is a US Marshall in a world like ours but with the addition of supernatural creatures such as vampires, etc. She has just come off shift and really needs to relax with her boyfriend but, unfortunately, an entire trailer park has just been taken hostage by a gang of vampires. This, on its own, is pretty worrying but, when she arrives, she finds that there is more to this than meets the eye, even the vampires are scared of this situation!

Shiloh herself is slightly magical and has the ability to grant wishes to humans, plus she has power over the combative nature of humans. This is all due to her having an Earth Djinn as her father and tempered with the genetics from her human mother. She has to use her wits and her magical abilities along with some new friends to try and figure out exactly what is going on to save both the humans and the vampires.

We get a lot of background in this the first book in the series but this is usual and is actually done quite well. We learn about the usual paranormal creatures like vampires and werewolves, but there are also shapeshifters, djinn and demons. They all have certain similarities with paranormal creatures in other books but there are some interesting spins on these characters as well. For example, this book has the only shapeshifter I’ve ever read that turns into a stag, normally they turn into wolves, big cats, coyotes or something with teeth!

This book feels a lot like other paranormal series out there, like the Patricia Briggs series, but I’m not quite so invested in her characters as with that series. By the end of this book, I did find myself interested in Shiloh and her friends and really want to see what other scrapes she gets herself into. I’d love to hear more about her family dynamic in particular and, we get a bit of this, but I would love to see more.

As with all new series, this first book could do with a little more polish, but it’s really not bad at all and I would recommend it as a decent paranormal bounty hunter/detective type novel. I’d like to continue reading to see whether Meding gets more into her stride in later books, but I really think there is a lot of promise in this book. If you enjoy other paranormal books in this genre you will definitely enjoy this book.

I’d like to give a trigger warning for spiders, there are some scenes with those little critters in and I wouldn’t want someone to go into this blind if they have a real phobia. I’m afraid of spiders and felt a little uncomfortable reading those scenes but I got through ok. Also, a trigger warning for vomiting, again this happens a lot and I know some people don’t do well reading this. There is a certain amount of violence at the end, but no more than other books in this genre, oh and a bit of a sex scene, too. Other than that you’re good!

That ending was full of twists and I’m really not sure who to trust anymore, which I guess is part of the slight cliff-hanger. I’m going to have to read the next book to find out how everything pans out with all the people in Shiloh’s life.