‘Spaceways’ is based on the radio play by Charles Eric Maine and although he never saw himself as a SF writer only a science thriller writer, explains why he dropped below our radar but having 4 films of his work certainly places him fairly high in the number of SF authors who have had films made from their work.

One of the earliest Hammer films, we follow Dr. Stephen Mitchell (actor Howard Duff) and his British team as they prepare to put a man into space. Thing is, Mitchell sees his wife, Vanessa (actress Cecile Chevreau) kissing Dr. Philip Crenshaw (actor Andrew Osborn) and doesn’t realise that there are spies on the base. Seeing their plans to get a spaceship into orbit and build a space station will make you wonder if that will ever happen. 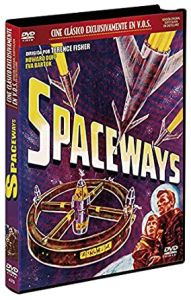 A rocket failure, although it got into space, and also the whereabouts of Vanessa Mitchell and Crenshaw who are both missing suddenly becomes a concern.

A British intelligence officer, Dr. Smith (actor Alan Wheatley) with a background in biology is sent in to find out what happened to Crenshaw. Smith thinks and tells Mitchell he thinks he killed his wife and Crenshaw and put their bodies in the spaceship and removed some fuel and achieved the perfect murder. He also tells they knew Crenshaw was a spy and need to know if he really is dead in case he escaped with any plans.

Although Dr. Lisa Frank (actress Eva Bartok) thinks she knows what happens to the fuel, the only way to get positive proof of any dead bodies in the spaceship is to send another rocket up to bring it back and Mitchell volunteers to be the astronaut, knowing without proof, he will one day face a murder charge.

Lisa Frank convinces fuel specialist Dr. Toby Andrews (actor Michel Medwin) to go with Mitchell, and replaces him at the last minute so she goes instead. Encased in their spacesuits no one can see who they are, least of all themselves.

Can’t reveal everything about what happened to Crenshaw and Vanessa because its spoiler, let alone what happens at the end.

This edition is from Spain but can be selected into English and using your DVD players options, you can turn off the Spanish sub-titles.

The spaceship effects are minimal, done by Les Bowie, with night hiding much of it. The progress into space as a manned flight is probably the most Science Fiction in the film, equipped by minimal dialwork. Much of it is a people story and changing romances and drama. For its time period, it probably works and probably more bog standard but is reasonably effective either on film or radio and still maintains some surprises.