Part of my research into cataclysms in Science Fiction, I asked Pauline Morgan for examples where she directed me to ‘The Darkest Of Nights, by Charles Eric Maine and then realised when the long river website told me I bought it last year when I looked into buying a copy. 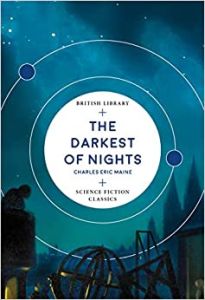 There is a Chinese virus called the Hueste virus. The AB variant is lethal resulting in liquidising the body down to the bones, the BA variant offers protection but can carry the first version. A third of the world’s population is expected to die. That should send a shiver down your back more than a few times. One little detail. This book was first printed in 1960 and the British Library re-released it in 2019 before the lockdown.

The name Charles Eric Maine might be unknown to you people as indeed it was to me. Mike Ashley in the introduction points out that Maine didn’t see himself as an Science Fiction writer but a writer of scientific thrillers. He was the pen-name of the prolific David McIlwain (1921-1981) and was also a radio scriptwriter. For those of you in the UK and watched any of the British 1950s SF films on Channel 81, then chances are you’ve seen some of them: ‘Spaceways’ (1953), ‘The Electronic Monster’ (1958), ‘Timeslip’ (1956) and ‘The Mind Of Mr. Soames’ (1970). Some of his books started as radio plays that he novelised later.

Reading this book, it quickly becomes obvious that he did his medical research and applied it in his stories and then added elements of likable or at least interesting characters deeply involved in what was going on.

Some aspects of the story is convenience plotting. We have the Brants, in the process of divorcing. Doctor Pauline Brant is a virologist, normally working in China for three years but back home in the UK on holiday but back at work in the emergency. Her husband, Clive, is a journalist in the process of changing jobs but in a need to find out what is going on as there is a news embargo.

Back in the 1960s, there was never a thought that something like the Internet would ever exist and far easier for countries to ‘D’ notice information so even when the news media knew anything they couldn’t print it. With the UK as the example, what looked like nuclear shelters were being built around the country to keep ‘important’ people safe from infection and for the medical research to continue in supposedly relative safety.

There are some aspects of this book we should regard as not happening in our own pandemic. Here, we have an uprising with armed rebels against the military and Clive Brant ends up in the middle of it. This is on par with what happened in John Wyndham’s ‘Day Of The Triffids’ and will send a chill through your bones. Both sides are as bad as each other but in a civil war, as we see them across the world, neither side is nice.

The switch from the medical problems to the civil wars that ended up happening not only in the UK but hinted at across the 1960s world should make you think. In retrospect, I can understand the reaction against authority who tends to look after themselves, believing leadership should be protected but without people to do the jobs, what would they be leading? Replacing one regime with another regime, you’re back to having them protect their own leaders and, as with all virus pandemics, any deadly infection isn’t picky on who it kills.

There is a hint that there is a potential cure for the virus, just not what kind of world will be left. A story such as this with certain updates would still work today although as we are living through a similar pandemic, we should be able to note things have never got as bad as in this book…yet. Mankind has a habit of being getting bored with needed regimes and if anyone in power reads a book such as this needs to realise that they need to be as open as possible with their population and give a lot of needed financial support to the scientific community to solve not only the current problem but to stay ahead for the future and ensure people are trained to keep going for any eventuality. After all, its not only covid we have to sort out but also that of global warming.

Reading this sort of book in the middle of a pandemic might not be a cheery thought but we should think ahead and be grateful how events were shown to happen in the early 1960s isn’t likely to happen this time or if we see warning signs that is it, do a vocal protest first.