The implication is that the hero of this story, Alec Shackleton, is a descendant of the famous explorer Sir Earnest Shackleton in a future where the Earth has been destroyed. He’s certainly an explorer who is not averse to a bit of hardship to get to his goal, so he does share some of the characteristics of his ancestor. When the Earth was destroyed so were most of the human population. Those that survived dwindled as they became enslaved or were killed for sport. It’s thought that less than twenty thousand humans from Earth now survive. The title ‘Shackleton’s Folly’ actually refers to Alec’s father’s obsession with finding a lost tribe of humans and a safe place for the remaining humans to live. It’s something Alec took upon himself to complete after his father’s untimely death. He’s assisted in this quest by Dancer who’s an AI in the form of a blue centaur.

The success of the quest ultimately relies upon finding three pieces of a broken artefact. The duo seek information and obscure star charts as they try to locate the items. They are somewhat hindered in this by the Koty Union. To be more precise, it is Captain K’Dhoplon of the battleship Illia, assisted by the human Wolfgang Gray that are the main source of annoyance for Alec. The Koty are an aggressive, war-like amphibian race more inclined to kill first, second and third and possibly start thinking about asking questions around the fourth. Wolfgang was captured in an earlier Koty action and has no option to help them if he wants to keep on living.

Apart from the obvious Indiana Jones similarities, there are shades of Han Solo about Alec Shackleton. He’s also upset the local crime boss Kasdan by being late on his payments. Kasden employs a couple of local thugs to track him down and seize his ship, the Quest. While keeping one step ahead of all this, Alec and Dancer meet and rescue a human young woman, Electra, who has been captured and enslaved. It seems slavery is alive and well in the future. There’s a lot more to Electra as she is on her own quest, which just happens to align with Alec’s, for the moment anyway.

While some of the story could be regarded as formulaic (prophecy, royal family, artefacts and ancient race) this is a rather good story with some neat touches. The local thugs, Worrell and Gino, are actually made up of eight cooperating life-forms (four to each named individual) which is an interesting idea. The story is fast-paced as they race to try and find the lost items which the Koty Union desperately wants for itself.

I enjoyed this book which is a pleasurable read, but there are a couple of inconsistencies. For example, at one point when trying to make it difficult for anyone following the Quest by jumping so close to a magnetar (a type of neutron star) it almost destroys the ship. None of the beings following them appear to have any problem following the trail though, as its not mentioned again.

‘Shackleton’s Folly’ is book one in ‘The Lost Wonder’ series and book two, ‘Shackleton’s Burden’, is also available. If you want an enjoyable Science Fiction book and if you don’t mind a mash-up of Indiana Jones, Hans Solo and Earnest Shackleton as your main character, you should give this a read. It’s rather a good story. 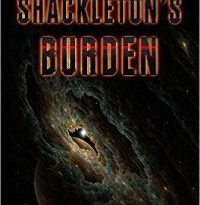