Never one to ignore old books, I picked up this 2003 book, ‘Science Fiction Poster Art’ edited by Tony Nourmand and Graham Marsh last year and now fitting it into my schedule. Even a book that is 15 years old can still have some relevance, especially when it comes to poster art. After all, when you consider the number of SF films that have come out in the time since, getting a comprehensive book now would be an enormous book and some films might have to be left out or just get smaller pictures to fit everything in. This book includes foreign posters where the art is different, as with ‘Escape From New York’ and even ‘Alphaville’. It also gives an opportunity to look at the poster and decide to check out an old film that you haven’t seen. 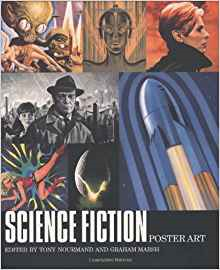 The foreword by Christopher Frayling makes an interesting point that these posters stick in people’s imaginations. He even splits them between serious SF and those that are just westerns in space. Our images of rockets came largely from SF film posters which I hadn’t realised how strong that was. Can the same be same for flying saucers because of the film ‘The Day The Earth Stood Still’ but then not all robots look like Gort. One robot from ‘The Master Mystery’ (1919) is the most awful I’ve seen and not one that pops up in SF books on the subject, no doubt because ‘Metropolis’ (1927).

A flick through to the book might make you think it’s predominately art but editors Tony Nourmand and Graham Marsh also write a lot of text as well, pointing out a lot of facts. As with all posters, you get to know who painted significant posters with biography notes and the size of the original painting. However, the only semblance of order are for the old 50s cinema serials and the super-hero selection. I was surprised to see some Russian films other than ‘Solaris’ in here, too.

The weirdest feeling was seeing really recent films and then discovering that they were done 20 years ago. A real sign of just how fast time is flying now. There’s also a lot of surprises. I hadn’t even heard of Willis O’Brien’s ‘The Ghost Of Slumber Mountain’ (1918) but at least I can see a poster for it here. Only the German poster for ‘The Abyss’ (1989) actually attempts to do a painting of the aliens although I have to confess that it looks nothing like the ones in the film.

Probably the most different posters shown here are for ‘The Creature From The Lost Lagoon’ with three shown and another three from the sequels. That was until I came across ‘The Man Who Fell To Earth’, ‘Star Wars’ and ‘2001’. With the latter film, it shouldn’t come as any surprise that three of the posters tell nothing about the story other than its in space.

Something they didn’t spot was the reason why the Italian poster for ‘Forbidden Planet’ (1956) had Robby The Robot carrying a man, unlike the woman in the American version. It is apparent from the painting that this is actor Warren Stevens and this did happen in the film, although the authors didn’t spot that. 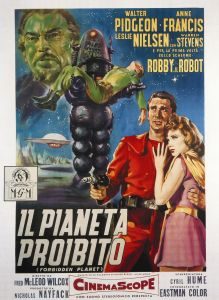 I should point out that the colours are all sharp in this book and does make me wonder why Aurum hasn’t done a re-release or even an updated version of this book. Then again, there is probably the matter of copyright and permissions and that’s a lot of companies.

With only 148 SF films here, it’s not totally comprehensive but it covers a lot of ground and worth having in your collection. More so as there aren’t many of these kinds of books available.