Oddly, TwoMorrows don’t have many paper copies of their ‘Rough Stuff’ magazine left and this is the only paper issue left from the looks of things. 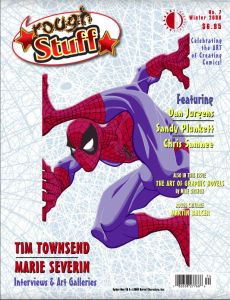 ‘Rough Stuff’ is generally a look at comicbook art in its preliminary stages and the comparing to the final inks. If you think the layouts are very basic, seeing the work of Dan Jurgens in the opening section shows a lot more detail and then seeing how much work the inker does.

Although some of the other artists aren’t that familiar with me, I’ll focus on those I do know. I didn’t realise Sandy Plunkett was such a perfectionist and used Al Williamson’s tracing paper overlays to test out different inking regimes before realising it was losing some of the spontaneity.

My favourite piece was the Dewey Cassell interview with Marie Severin explaining how she was Marvel’s cover designer for several years. It’s rather interesting to note how John Buscema and Jack Kirby admired her work with the former noted that she had done all the thinking for him at the design stage.

The interview with inker Tim Townsend has an explanation of how much the penciller has to trust the inker with their art.

Of particular interest is editor Bob McLeod showing a new artist who volunteered his work as how to sort out some problems. Top of that list is ensuring the more passively posed lead character is facing the same direction throughout the panels. It would have been interesting doing a comparison and showing how to use a similar set-up and how to deal with a head swing reacting to something.

Something that I wasn’t aware of with the earlier black and white TwoMorrows publications is that the digital versions have colour where the source material was done in colour. 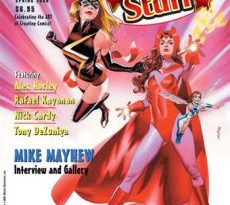