I’ve been eyeing this issue of ‘Rough Stuff’ for sometime mostly because of the great cover of the Scarlet Witch and Ms. Marvel. Getting it up close and its easier to spot the Wasp there as well. Sometimes, small digital doesn’t do a picture justice. Even more surprising inside the magazine shows artist Mike Mayhew developed the picture. 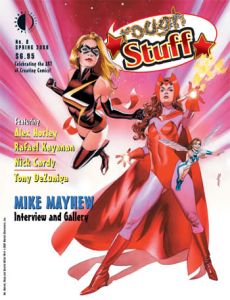 For those who don’t know, editor and artist Bob McLeod looks at the preliminary pencils of various comicbook artists. This gives a lot of insight into art preparation which always makes for interesting examination for artists. To see more of Nick Cardy’s pencils is a bonus for me, as it shows figures in motion and from unusual angles. The same also applies to Tony DeZuniga. I’m more familiar with his Marvel work but seeing his DC Comics work on ‘Jonah Hex’ shows a sight I’m less familiar with.

An extra bonus is having Dominique Leonard giving a rundown on various European comicbook artists. As he points out, these people both pencil and ink their own adventures often taking a year to complete their stories. Allowing for the 2008 year, some have now died but all insightful.

Oddly, the interviews with comicbook artists Rafael Kayanan and Mike Mayhew do show something in common. They both work out from tonal levels with their illustrations/paintings. That is they indicate the values of where the light is coming from for chiaroscuro before adding detail so having the necessary mood set. Kayann does a lot of detail in his work and Mayhew is a photo-realistic painter using models to enforce his poses. Both are informative with a good selection of art.

Finally, Bob McLeod demonstrates, with its artist’s blessing, what was wrong with his page sample which turns out to be a masterclass in technique polishing and why. Considering most of the paper editions of ‘Rough Stuff’ are sold out, I suspect it is these masterclasses made neo-artists pick these magazines up. Truly instructive. 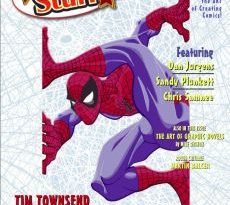