The latest issue of ‘Retro Fan’ kicks off with a look at the original ‘Shaft’ movies by David F. Walker and how they differed from the books and even more so when it briefly became a TV series. However, what makes this article even more significant is a general look at the blaxploitation phenomenon.

Although it is pointed out that Shaft’s creator, Ernest Tidyman was white, outside of Chester Hymes and Iceberg Slim, both black writers that I have read over the years, little is said about the ethnicity of the writers. You would think there would be more black writers with black characters being successful. Even so, I suspect you’ll use this article to look up various books, films, and TV series to read and watch. 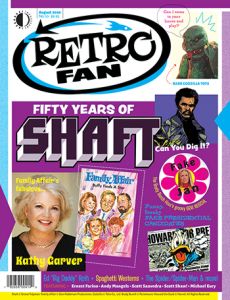 With the upcoming American presidential election, the look at fictional characters putting their hats into the bowl for the real job is wider than I thought. Objectively, some of them might actually have done a good job, fictional or otherwise. We British have a reputation for going for the jugular when it comes to making fun of leaders in the UK, mostly because they deserve it. Reading Scott Saavedra’s article, although extensive, doesn’t raise the question as to why it doesn’t happen more now, or am I taking this too seriously?

There’s a quick look at the dance craze ‘The Twist’, although looking back objectively, it really could only be applied to a couple of songs, even if it was like it was last summer. Considering the no-physical contact rule right now, I’m surprised it hasn’t made a comeback.

Much of Kathy Garver’s work hasn’t been shown in the UK but Shaun Clancy’s interview with her explores her life as a child actress to doing voiceover work as an adult.

Will Murray draws some interesting parallels of the pulp character ‘The Spider’, created by Norvell Page and that of Stan Lee and Steve Ditko’s ‘Spider-Man’. This shouldn’t be surprising as Lee was a fan of ‘The Spider’ and it looks like various things stuck as a template for his modern creation. Even so, The Spider himself owes some of his composition from the other 1940s pulp heroes so also enforces proof that rarely is something new.

Andy Mangels continues with the second part of his three-part look at Saturday Morning Specials this time for 1978-1983, none of which I can recall being shown in the UK.

I can’t ever recall ‘The Brady Bunch’ being over here, although I did see snippets of ‘H.R. Pufnstuf’ out of curiosity so wouldn’t be able to tell the difference between a real or Fake Jan, the nickname given to actress Geri Reischl who took over the part in the Brady family show. Even so, the interview by Mike Eury gives some insight into the recruiting business and Reischl’s career before and after.

I had to have a deep think while reading Scott Shaw!’s article about Ed “Big Daddy” Roth (1932-2001) and his RatFink cars, both full size and those created as model kits by Revell. Despite being exposed to a lot of American media, I’m very hard pushed to think I ever saw any of it before. Even so, I did look his work up on Google and the designs are eye-dropping even nearly two decades after his death.

The interesting part about reading Ernest Farino’s article ‘A Fistful Of Pasta’, is he works in the film industry moving from journalist to director and had access to Sergio Leone and Lee Van Cleef and others as he discusses the former’s spaghetti westerns and some photos to die for. Well, not really die for, but you know what I mean.

Robert V. Conte’s look at how Godzilla conquered the USA is more from merchandise than accenting on the films. If you collect the King Of Monsters’ merchandise then you might discover things here you might have missed, even if it is a fuchsia plastic model kit and you have to wonder what was in the mind of Aurora at the time other than having plastic in that colour.

Finally, a look at the Stuckey’s roadside stores by Tim Hollis that also promoted their own pecan candies and toilets at the right intervals on the highways.

Much of this edition of ‘Retro Fan’ is more American culture than things that have seeped into other countries, but it does give insight for the rest of us and stir memories for you people across the pond. 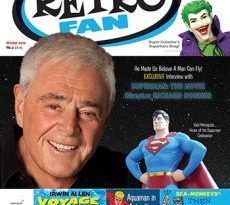 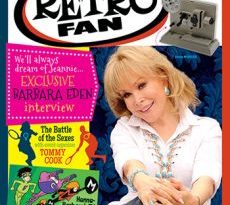 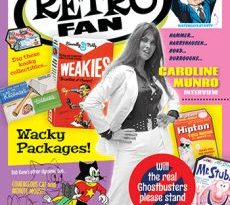