‘Requiem For An Astronaut’ by Daniel Bennett is another novella from Newcon Press. At a hundred pages, they provide the succinctness of a short story but with more space to show characters and develop a decent plot. Robert Silverberg said a novella was the perfect length for a Science Fiction story. I like them in general and I really liked this one. 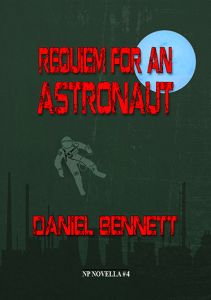 ‘Requiem For An Astronaut’ is set in a dystopian future where plagues brought back from mining expeditions to Mars have devastated society. There’s not much law and order but there is still business. Transactions and exchanges make the world go round so life goes on, albeit more dangerously.

The first person narrator is Bart, an old scientist, who has moved away from the largest local settlement, East City, and retired to a house/laboratory in the country where he studies data to find out what happened to Joan Kaminsky, now known as Saint Joan. Kaminsky vanished on a test flight powered by experimental alien technology and appears intermittently and enigmatically as a glowing figure in the skies above East City. Bart worked on the space programme and was a friend of Joan.

As the story begins, smoke on the horizon tells him there’s been an attack on the organ farm not far away. He assumes it was the Luds, an anti-technology cult who have taken over a ruined town somewhere to the north. When a young lady named Cal turns up seeking help, Bart lets her stay with him.

She worked at the organ farm and managed to escape the slaughter. It was run, almost as a cult, by a strange woman known as Mother Ray and it seems the Luds have taken her captive. The plot thickens when Marvell turns up. No poet he, but area security chief for ExCorp which was meant to defend the organ farm. Marvell is very interested in Mother Ray as well. Bart gets drawn into these events and his quiet retirement ends.

I liked everything about this. Bart is a perfect narrator with a calm, observant, slightly jaded point of view that doesn’t lapse into cheap cynicism. His style is relaxed and his musings reveal much about the past history of his world and the nature of society. I particularly enjoyed his interactions with Marvell which reminded me of certain scenes in Graham Greene novels where a powerless protagonist plays games with an intelligent interrogator who is basically a thug.

Further research reveals that Bennett has a story in Interzone # 290/291 July 2021, ‘An Island For Lost Astronauts’ that is set in East City with the same background. I may check it out. In any case, ‘Requiem For An Astronaut’ is a pleasing, easy read with odd, poetic moments that will make you smile. I didn’t quite get the ending but that’s a small quibble. Overall, highly recommended.