Continuing their incredibly deep dive into the works of Jack Kirby, TwoMorrows presents this lavishly illustrated and coloured exploration of a specific chapter of Kirby’s life. Wanting more recognition, a better contract and, above all, more creative freedom, Kirby would leave Marvel to work at DC, drawn in by the promise of being able to tell his epic ‘New Gods’ series. It was a bold and ambitious plan, with Kirby’s story stretching across four comics: ‘New Gods’, ‘Forever People’, ‘Mister Miracle’ and the brilliantly named, ‘Superman’s Pal, Jimmy Olsen’.

The ‘New Gods’ story would end unfinished, providing this book the opportunity to explore the political, business and personal reasons behind its cancellation with the depth TwoMorrows readers have come to expect. 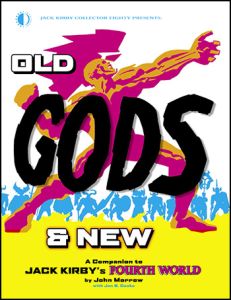 Even as little more than a Kirby dabbler, I found this a fascinating book, because it gives you an insight into the bizarre, petty and incestuous world of 60s and 70s comics publishing. I was also impressed that for a publisher built on celebrating Jack Kirby’s career, the book lays out Kirby’s creative faults and how these may have contributed to his series being cancelled.

You’re repeatedly shown that if not making it up as he went along, Kirby often came pretty close, once telling his assistants to write a Loch Ness monster story then immediately forgetting he’d done that and writing it himself. Faults aside, the book does an excellent job of illustrating Kirby’s genius and just how much of a debt the modern super-hero metaverse owes him. I particularly liked the end section breaking down how the characters Kirby created for his ‘New Gods’ series have since been used in comics, cartoons and films.

To very briefly run through its content, the book begins with how Kirby got from his Marvel ‘Old Gods’ work to his ‘New Gods’ series at DC, then looks at how Kirby’s new ‘Fourth World’ bridged the several comics involved. We then get an extremely comprehensive look at each of those comic titles and their characters, plus how they interacted with each other and the rest of the DC universe.

There’s a ‘365 Days Of Jack Kirby’s Fourth World’ that highlights all the new elements he created for the series, followed by a long timeline of the epic’s creation, unfolding events and eventual cancellation. Finally, there’s a study of the ‘New Gods’ legacy, such as Kirby revisiting it in later years and the toy line.

If you’re a Kirby fan or comic historian then you should pick this book up immediately. If, like me, you’re interested in but relatively clueless about the history of super-hero comics then ‘Old Gods & New’ is quite a dense read and will often explore areas that you’ve probably never heard of.

The book tries to provide enough context but there are still areas it has to skip over. Nonetheless, this very human story of one man’s creative vision versus harsh business realities and personal politics will resonate with anyone with even the slightest interest in comics history.