Looking at the examples cited by author Heather Duerre Humann in her introduction to her book ‘Reality Simulation In Science Fiction, Literature, Film And Television’, I’m looking forward to seeing her knowledge in the chapters of this book. Keep a notepad ready because you’re going to want to check out her examples from fiction, non-fiction, television and films. This book will keep you busy as we enter Science Fiction virtual reality territory. Of course, as SF fans, we’ve known about it for a long time but there’s always some material that will escape our net. 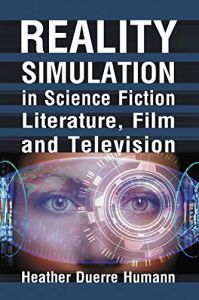 For those who don’t know, Daniel F. Galouye’s ‘Simulacron-3’ back in 1964 is acknowledged as the first Science Fiction story set in a virtual reality. It’s been on my reading list for a while, just a matter of finding time to fit it in. Oddly, it isn’t regularly in print so I can’t judge what Humann has to say on the subject. Even more oddly, it appears that the next was in 1995 with ‘Amnesia Moon’ by Jonathan Lethem doing the next and its sequel, Chronic City’ wasn’t out until 2009.

Of the books she goes over, it was only ‘Ready Player One’ by Ernest C. Cline that I was familiar with as I was one of its early reviewers. Unusually, she doesn’t detail much of their plots but only their social implications. Although I am often critical of writers detailing too much plot, Humann goes far too much in the opposite direction and nothing really sticks and I was surprised by how quickly I was reading this section of her book.

Problem is, when I put my Science Fiction hat on, I do have to wonder why Ian Gibson’s cyberpunk novels aren’t acknowledged. Then it dawned on me, she was looking from the pov of ‘virtual reality’ and not the other names it goes by. Had she looked at comics, then she would have had to have considered Marvel’s ‘Deathlok The Demolisher’ in the mix as well.

When it comes to films, I feel Humann is on better ground. Granted she is choosing modern SF films than some of the classics and she does mention ‘Videodrome’ only in passing. Even so, I do wonder if she’s missed watching ‘Brainstorm’ (1981) or ‘Dreamscape’ (1984). After all, what are dreams but another virtual reality, more so when you get into other people’s heads. She does look at ‘The Thirteenth Floor’ (1999), ‘Inception’ (2010), ‘Sucker Punch’ (2011) and the TV film ‘Black Mirror: Bandersnatch’ (2018) and, as of writing, I have seen three of them. It’s all very well to use a limited number of examples to make a point but I do wonder if it’s discussing modern perceptions of virtual reality or looking at the whole range. It isn’t as though there are an unlimited number of films on the subject out there.

Of course, if you are going to rely on specific examples, you tend to remain that way throughout rather than seek generalisations across the entire, albeit limited number, that is out there. From my perspective, the reason that there aren’t many novels using virtual reality, even in cyberpunk, is why have an imaginary reality inside a fictional reality unless you’re making some point about it? Even ‘Star Trek’s holodeck was basically added to produce some variety away from the confines of the Eterprise’s bridge and corridors and what to do with the spare time.

With her third section of VR on TV, Humann seems more comfortable, including synopsises for the series she explores. I think she’s convinced me that I need to look at ‘Black Mirror’ (2011-). Her other choices are both mini-series in the form of ‘Maniac’ (2018) and ‘Reverie’ (2018) and no mention of ‘Harsh Realm’ (1999-2000) which was, I think, the first to use VR on TV as a series. I’m not sure if Humann has fully researched or relied on short criterias for her choices, more so as she does deal briefly with histories in each format.

If anything, I think that might be the main problem with this book. She has a 10½ page bibliography but glancing through it, there doesn’t appear to be anything about virtual reality in general to guide her. I suspect that if she looked at some SF encyclopaedias as well, she might have found even more examples to choose from. Without them, she might convince you, if you don’t have the knowledge, that these are all the SF Virtual Reality material out there when there is a lot more coverage.

This doesn’t mean this book isn’t interesting but it does taint the choices by omission and not really answer the question of why VR isn’t used more as it is conceivably the future of computer games in our reality once the headsets stop looking like boxes.