When I started Stanislas Dehaene’s book, ‘How We Learn’, with its sub-title adding the detail, ‘The New Science Of Education And The Brain’, I didn’t expect the opening chapter to focus on Artificial Intelligence. More so, as in the introduction, there was a lot more focusing on what made humans different to other members of the animal kingdom was its ability to learn. I think I would have added to that also the ability to imagine and be creative. Other animals might be able to do some of that but not to the sophistication the human animal can achieve. 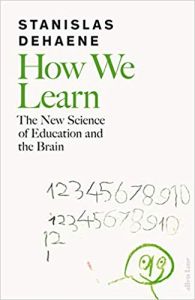 Comparing how the Chinese construction their sentences in a somewhat backward manner to English, I’m amazed their language never developed a different way to do it.

Seeing the comparisons of how quickly a human can learn compared to an AI should make you think. A human can learn a game in 2 hours, an AI taking up to 4000 hours, so you have to wonder which is faster? I wish his info was backed up by how often each won afterwards though. Teaching an AI to be flexible, even in recognising letters of the alphabet in various formats, from my perspective, means making a lot of connections for it to ensure it makes a correct assessment.

The examination of the four memory types should make you look at which you depend on the most, although I suspect we’re so used to using all of its functions that we take it for granted. It did make me wonder why we haven’t tried this approach with AI. After all, it doesn’t need to remember everything in the same way. Oh, with babies, make sure their milk formula has thiamine in it. The body doesn’t retain it, but a deficiency can be fatal.

When Dehaene moves over to the elasticity of the brain when young, it does confirm something I’ve always recognised. If you want your kids to be bilingual or more languages then they really do need to start really young. When I was at school, we were introduced to learning French only at secondary school. We might have parroted the words but unless we went to France, which I didn’t, then it doesn’t sink in that well. Mind you, I can still recite numbers in French and some words and odd famous sentences but that’s as far as it went. I just have a good retentive memory. Chapter 5 should be required reading for those of you with young children. Considering the various ethnicities of children at schools in the UK these days, I do wonder how much of other languages is being absorbed and spoken.

When it comes to mathematics, I would argue against some aspects of early learning in that you never stop learning. A couple years back I read the book ‘The Trachtenberg Speed System Of Basic Mathematics’ on how to speed up calculations and adopted some of them. It does help to have a daily practice though. If a method looks better than you currently use, then you’re bound to adapt it.

Dehaene makes useful observations about the plasticity of the brain and goes over some of the standard tests, including how attentive you are. Magicians use this to their advantage all of the time. It isn’t that we’re especially thick but purely down to how our senses work in not seeing everything you think you are seeing. Something I would address about multi-tasking isn’t so much doing things simultaneously but more to do with being able to flip through things very quickly and not losing track.

Something that I wasn’t totally expecting from this book was the stirring of memories of my own education. I would disagree with Dehaene that if you keep asking questions, especially at college level, that you were thought of as being disruptive. Whether that’s changed since then, I don’t know but when you’re faced with tutors who spend more time putting their notes on the blackboard to be copied, you have to wonder what happened to teaching and why curiosity sagged. You’re going to find the chapter on ‘Active Engagement’ very meaningful. Dehaene makes a good argument for continual testing to ensure the lessons go into your long term memory.

Looking at how a lot of things become autonomic, I do wonder how much that applies to correct grammar and why common mistakes are passed from teachers to pupils without anyone doing a refresher.

Oh, if you want to improve learning, then ensure you get a good night’s sleep so your brain can process the information to the right parts of the brain. I did wonder if that should be extended so that the next day teachers could test to see how much you remembered before moving on.

There are a lot of pointers in this book for people of all ages to learn from let alone reflect. I suspect older students will find sleeping to make sense of their lessons handy. Dehaene finds the elasticity of the human something that AI isn’t likely to be beaten. Read and learn. A great starting block.