‘Rabbits’ by Terry Miles revolves around a strange, little understood game that’s potentially been running for hundreds of years, with rules so esoteric that it’s difficult to tell if you’re actually playing it. I can’t really describe the game here, but suffice to say it comes across as a mashup of escape room, videogame, interactive theatre and treasure hunt. The hook is that someone is potentially messing with this iteration of the game, making it even more deadly than it usually is.

Honestly, I didn’t need this extra addition, as trying to figure out how the game works, who’s running it and how you might win it is enough of a drive to keep you reading. 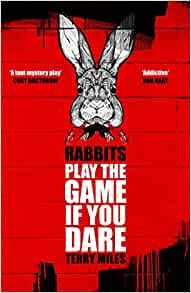 Our protagonist is ‘K’, who has some deeper connection and insight into the game than everyone else. But like the similarly mentally gifted Cayce from William Gibson’s ‘Pattern Recognition’, no matter how much the author tried to explain the protagonist’s special mind power, I never quite got a clear grasp on how it works. In the end, K and his friend Chloe are running around, solving clues and dodging danger gives the whole thing a slightly Scooby Doo/meddling kids vibe. There are big players involved here but that none of them just kill K and be done with it does somewhat stretch credulity.

Another issue is that while the game and its cast of colourful players are a strong draw, you’ll need a certain amount of patience with some recurring elements. K’s internal monologues and tendency to drift onto tangents are fine, but other motifs are less successful. These include repeated dreams whose surrealism quickly wears thin, the author narratively cheating by having K continually get out of trouble by passing out and waking up elsewhere, and characters saying, ‘I’m not going to explain anything now, but I’ll definitely tell you more tomorrow and I sure hope nothing bad happens to me in the meantime!’

Despite all that, if you’re at all interested in gaming culture then the premise behind ‘Rabbits’ will make it compulsive reading. There’s a nice sense of ‘unknowable intelligences’ that threaten reality, too, which again serves to keep you guessing as to the nature of the game. Like Ernest Cline’s ‘Ready Player One’, you really need to understand the nerd references being thrown around to get the full experience, but if you do then it’s fun to think wait, I’ve played that game in real-life, is what they’re talking about really in it?

Even if some of the references are pretty obscure, the fundamental strength of that central premise will be enough to keep you hooked.