I often mention my practical application of General Semantics. Picking out books to recommend on the subject is a lot harder, mostly because the likes of the formative books, like Alfred Korzybski’s ‘Science And Sanity’ was originally released in 1933 and you would wonder if it could be relevant today. General Semantics is less a philosophy and more a way of lateral thinking, looking at all options and not confusing words with territory. 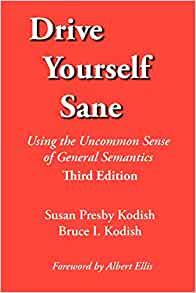 So I thought I’d pick up a couple modern books on the subject. ‘Drive Yourself Sane: Using The Uncommon Sense Of General Semantics’ by Susan Presby Kodish and Bruce L. Kodish being a third edition at least affirms it sold well. They explore the subject with some tests at the end of each chapter.

On page 44, one of the tests is to put 3 and 4 straight lines on a 9 dot grid touching each dot. Oddly, I chose to do it by the most simple way although their answer at the back of the book showed a different pattern to make a point. Logistically, it would also have made sense to assure the reader that there was more than one solution than just the vertical approach, although that is also telling about the way people think. It would be interesting seeing different interpretations of this from across the world, especially those who read right to left.

Of course, as someone who applies General Semantics in normal life, a lot of this book is affirming things I do automatically or areas I need to sharpen up. Like with grammar, it does pay to read up on the subject from time to time to ensure its being done properly. Don’t underestimate this skill as General Semantics teaches sharp observation of things around you and not to look at things from only one perspective. The comparisons between Artistolean and Non-Artistolean thinking should make you stop and think.

I do like them pointing out that in English, the 500 most common words have 14,000 dictionary definitions. Hardly surprising they ask people which specific meaning they use when used out of context or someone defining themselves by a particular label. None of which is helped by the language expanding and always adding words. Then again, English allows that to happen whereas some languages show less flexibility to change and only now slowly incorporating other technical words.

In many respects, the authors cover the same areas as Korzybski’s ‘Science And Sanity’ but in a smaller book. I think I would have liked to have seen some comparison on any changes in our way of think across the population from 1933 to the present day. General Semantics is, after all, a way of thinking and how we look at life at the world around us and puts a date on everything. Applying the principles is far more important than turning it into a discipline that has to be studied religiously.

If you understand the approach and its clarity of thought, you might actually get a little way into my head. Looking back over my lifetime, I think the biggest change it made to me is assess all choices as to which is a good selection than go into an argument with any biasness. It made me a stronger thinker and willing to change things when more evidence comes along.