British born director Paul Dudbridge’s first book, ‘Shooting Better Movies: The Studentmaker’s Guide’ that I reviewed last year makes an enormous jump to ‘Making Your First Blockbuster’ this year. Part of me thinks I would have preferred to have had a book on just getting a ‘normal’ film directed in a professional capacity before jumping this far up the tree.

We can’t all be Spielberg, who incidentally directed the second significant blockbuster in ‘Jaws’ (1975), the first being ‘Gone With The Wind’ (1940). I’m not disputing the first but there are several other films between them that I would certainly place in the blockbuster category that came earlier. However, from Dudbridge’s perspective, ‘Jaws’ started the trend of one blockbuster after another and, in the 1970s, this was invariably between him and that other fella, George Lucas. 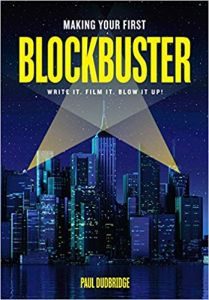 As with a lot of film-making books, there are lessons here for potential novices as well, especially at the formative stages of preparing a script. Working out a structure to work from doesn’t mean it can’t be changed but it will give you a path to look back at if you think you’re losing your way or what inspired you to start in the first place.

I like Dudbridge’s description of ‘Hollywood dialogue’ which removes the ‘ummming’ and ‘arrr-ing’ that we seen in normal speech. That certainly applies to dialogue everywhere. I suspect a lot of people don’t even notice it much in normal talking anyway and just see it as someone else’s brain is ticking over coming up with a reply and hope they give you a similar courtesy. I tend to have a hyper-speed brain where I’m giving an answer as the person talking finishes and I’ve seen that throw people because they can’t keep up. I was born that way but I can see it as off-putting but some humans are so slow.

A lot of this book applies no matter what size of film you are making. His lessons on lighting should be read by the directors and DPs who’ve done films recently where they’ve had it far too dark at night. With direction, the tips given would also work for comicbook artists in setting their scenes. Hardly surprising when these artists are also employed in creating director’s storyboards.

There is also some emphasis on special effects and stuntwork. Seeing how a fight has fists 4 or 2 fists away from each other is a useful lesson in ensuring no one gets hurt. Equally, is having a proper licensed armourer taking care of the weaponry so no one gets hurt.

This book concentrates a lot more in the film-making aspect than the financing but if you’ve been given a blockbuster budget, your funds are less limiting. Even so, whatever size film you’re making, you always need to be aware of what your budget can do.

The book has two columns of text per page and although there is a lot to read, you come away with a greater knowledge than before you started, which is no mean trick considering the number of film books I read last year. I’m almost starting to use the technical terms with a greater understanding as well now, too. Whatever the size of the film you are making, this book should be well-read before you start. 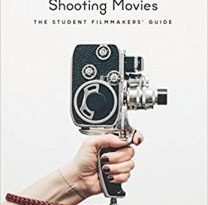