The first novel by Emma Newman, ‘Planetfall’, was a masterpiece in characterisation. It could have been set anywhere and at any time and still made an impact. A bonus was the way the society had been set up as a very believable colony on an alien planet. The second novel is not exactly a sequel but takes the same universe but takes a totally different approach. ‘After Atlas’ is the story of some of those the left behind on Earth. It takes place about forty years after the colonists left. 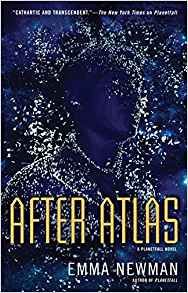 The premise of the technology that most of the inhabitants of Earth use is similar to that used in novels by other authors in that everyone is connected to a universal information network. A chip allows access, though there are some areas that need higher security clearance than others. The information is projected visually onto the eye. Society, though, has kinks unique to Newman’s universe. People remain the same in their desires and behaviours.

The people who left on the spaceship were part of a cult who went seeking the truth. One was the mother of the main character, Carlos Moreno. She left when he was a new-born and his life has not been easy. His father, also left behind, didn’t cope well and it was only when the cult leader, Alejandro Casales, recruited him that life took a different direction. Life in the commune left lasting marks on Carlos, even though he resented his father’s choices.

He left as soon as he was old enough but had developed a taste for real food. The food supply for most of humanity was solved by having 3-D printers turn nutritious gloop into something resembling acceptable food in appearance and taste. Events since Carlos left the cult have given Carlos a job as a Gov-corp detective but he is not a free man. Gov-corp owns him by means of a contract, a subtle means of slavery and he spends most of his income on real food.

The novel opens when Casales, in a rare visit to England, is apparently murdered. At least, his dismembered body is discovered in a hotel room. Because Casales is not chipped, his last movements have to be ascertained by old-fashioned techniques of interviewing witnesses. The hotel concerned is remote and caters for the very rich who like their privacy. It is one of the other guests, the obscenely wealthy and arrogant Stefan Gabor who irritates Carlos. So when Gabor convinces himself that Carlos has colluded in helping Gabor’s husband run away, Carlos finds that with money you can do the impossible by buying Carlos’s non-transferable contract from Gov-corp he is given an ultimatum.

The death of Casales, and the immanent opening of the capsule the colonists left behind set a chain of events in motion that sweeps Carlos along. These two events change many lives.

With the rate of advance of technology the society depicted is all too plausible. When everyone is chipped, there can be no hiding place. Gov-corp has permissions to locate you wherever you are and monitor all communications. Technophiles may well be comfortable with this but others would consider it a nightmare scenario. With the advent of 3-D printers, how long will it be before someone finds a way of using them to turn nutritious gloop into palatable food?

It solves the food problem but skills such as cookery are lost. Restaurants for the average person doesn’t need a chef, just a technician. Like now, if you have money, you can have what you want and make your own privacy. Naturally, there will be rebels, which is why Casales cult is either desired or regarded with suspicion. Within the enclave, no-one is chipped or can be connected and all food eaten is grown.

The problem with a high-surveillance society is that the technology can so easily pinpoint the perpetrators of crime. Newman gets round this with the high-end hotel where most of the action takes place and privacy is at a premium and that key players are not chipped, allowing Carlos to unravel the mystery the old-fashioned way, thus making for a more suspenseful story. It also forces Carlos to reassess his past and his relationship with the dead man. This is a delightful study of characters in a high-tech society. 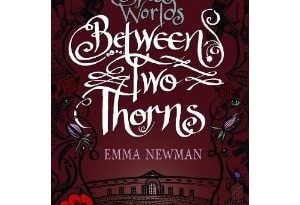 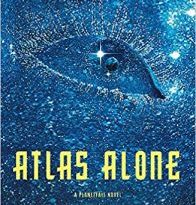 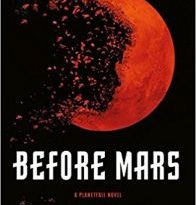