The Jack Kirby Collector # 75 is a special book-sized issue entitled ‘Kirby And Lee: Stuf’ Said!’ It’s an attempt by publisher John Morrow to tell the history of the creation of Marvel Comics in their words, mostly, of Stan Lee and Jack Kirby.

There are lots of other words included, not least those of Mister Morrow himself who interjects comments throughout to put the quotations in context. Any speculations on his part are accompanied by a diagram of a salt shaker to warn that, in the interests of fairness, they should be taken with that condiment added. 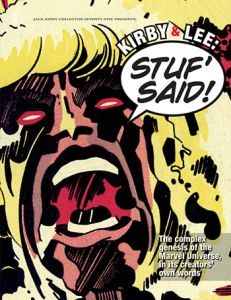 Naturally, Kirby’s quotes give his point of view that he created everything and Stan just put in the word balloons later. In many interviews, Stan gives Jack credit as co-creator of the characters. To be fair, he accurately describes the Marvel Method which goes like this: A writer and artist get together and discuss the plot. The artist goes off and draws the story so he’s in charge of the visuals, the pacing and making the whole thing concrete on paper.

The artist then hands the drawn pages back to the writer who scripts the captions and word balloons. Lee admits to working this way but is inclined to downplay the role of the artist and the credits, which he wrote, said ‘Written by Stan Lee’. Later he condescended reluctantly to call a book a Stan Lee/Jack Kirby Production.

The Marvel Method worked well for Stan Lee. It saved him the tedious chore of writing a full script with panel by panel descriptions of the story, such as John Broome and Gardner Fox were doing over at DC comics. As he said, it’s a lot easier to write dialogue with a picture in front of you. It also saved him the labour of detailed plotting. In fact, he preferred not to bother with plotting at all and often insisted that the artist come up with something.

He fell out with Wally Wood over this and shouted at Dick Ayers when he dared demand plotting credit for a ‘Sgt. Fury’ story. Stan Lee could do this because he was the boss and the owner’s cousin and there wasn’t much work about in comics at that time so artists were reluctant to fall out with the boss. It should also be noted that Stan got the writer’s fee for the book and the artist got no more than the usual page rate for drawing, doing the plotting for free. Wally Wood said: ‘I want the credit (and the money) for everything I do! And I resent guys like Stan Lee more than I can say! He’s my reason for living…I want to see that no-talent bum get his…’

Wood’s ambition was never realised. Instead, Stan Lee rose to fame and glory as the creator of Marvel Comics. This started in the 1960s when college students began to read the stuff and Marvel became a pop culture phenomenon. Newspapers and magazines wanted to interview someone and, as writer and editor, Stan was the front man for the company. He was also charming and witty and came across well, a reporter’s dream. This role increased and his star grew brighter. Meanwhile, Jack Kirby was at home in his basement creating new characters, turning out great stories and fuming. Stan tried to give Jack credit but newspapers simplify things, his photo was on the cover and Stan Lee was Marvel.

Jack Kirby burst on the comics scene like a supernova with the early issues of ‘Captain America’ and stayed a star for the next two decades inventing great characters and whole new genres until silly censorious senate hearings put the whole industry in a slump. Stan Lee was writer and editor of a small, second-rate company that copied every trend, published any old rubbish and nearly folded in the late 1950s.

When Kirby came along, Stan suddenly metamorphosed into a creative genius who came up with a bunch of great new characters and concepts that changed the world of comics. After Kirby left, Stan created very little, certainly not without some ‘co-creator’ whose name came second. On the other hand, Jack never had real commercial success after he left Stan, though he did create the ‘Fourth World’ pantheon which DC exploits heavily to this day.

They both worked hard. Jack was bent over a drawing board for twelve hours a day while Stan ran the office from nine to five then went home and wrote scripts. He wrote wonderful, witty scripts and definitely made the characters more interesting and dramatic. Partly, it was via the gimmick of giving them some physical disability like Tony Stark’s weak heart, Don Blake’s lameness and Matt Murdock’s blindness. Partly it was by adding soap opera elements whereby love was always being discovered, lost and regained.

The DC super-heroes just had a girl-friend or wife and cruised along in a pleasant relationship with occasional minor tiffs. The Marvel heroes also had problems with money, work and so on just like real people. That was Stan Lee’s innovation and he deserves credit for it. It’s not entirely his fault that as front man for the company he got credit for everything else, too. That’s how the media works. As Jimmy Stewart said in ‘The Man Who Shot Liberty Valence’, ‘newspapers print the legend.’

This is a work of solid scholarship and ends with a ‘Verdict’ in which Morrow reveals his perfectly fair and rational conclusions based on the evidence. The recent death of Stan Lee makes the book more poignant.

Although I think he should have given the artists more credit on page one of the comics, Stan wasn’t a super-villain or even a villain. He had to work under publisher Martin Goodman and, although he ended up on a big salary, he never owned any rights to the characters himself. Kirby’s main concern was being a breadwinner, earning enough to look after his family. After the recent out of court settlement with Marvel’s new owners, I imagine they are all doing very nicely, thank you so he can rest easy.

There are no real surprises for long-time readers of ‘The Jack Kirby Collector’ as many of the quotes have been cited therein before but it’s nice to have them all gathered together in one place and put in chronological order. The book is a significant contribution to the history of those comicbooks that have now been translated into films and conquered the whole world, yea even unto Disneyland.