CAPSULE: With a film like ‘Kronos’ the viewer should not be looking at how convincing the special effects are but how clever and efficient they are as they come close to working. From a distance, ‘Kronos’ looks like a fairly spectacular Earth invasion film. Seen individually each visual effect seems to give up its secrets quite readily. But there are enough visual effects to make the film seem like a much bigger budget film. I do not think when it was released anybody laughed at ‘Kronos’ and called it tacky and that is a small victory itself. Rating: low +2 (-4 to +4) or 7/10

When I was young I considered ‘Kronos’ to be one of the better Science Fiction films of the 1950s. Possibly I considered it to be on par with a film like ‘Earth Vs. The Flying Saucers’. It never occurred to me that it was a low-budget film. In fact it is something of a pinch-penny production with acceptable special effects and acceptable scriptwriting. Examined today, the script is horrible as it attempts to counterfeit scientific jargon, but the special effects are really very clever. 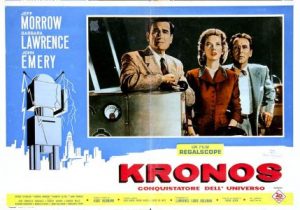 The film opens with a mysterious spacecraft emitting a globe of light that floats to Earth and somehow possesses a truck driver by flashing into his face. Under its influence, he breaks into Lab Central, a research establishment where the light jumps from him to a scientist, Dr. Hubbell Elliot (played by John Emery). The driver falls dead and now it is Dr. Elliot who is acting strangely. Lab Central is in an uproar over an asteroid that is behaving in an unusual manner. In specific, it is changing its course in ways not predicted by physics. It seems have changed direction to be on a collision course with Earth. Dr. Leslie Gaskell (Jeff Morrow) is convinced that there is intelligence behind the asteroid’s change in course. He orders an atomic missile attack to destroy the asteroid only to have it change course again and plunge into the Pacific just off the Mexican coast.

Several scientific institutions plan expeditions to visit the site of the crash, but Gaskell believes that the asteroid is being controlled by intelligence and that there is no time to lose. While it is not apparent at first, something is happening. Alien forces are constructing an energy accumulator, a hundred-foot-tall metallic device to suck up energy and, in some way not explained, it will send that energy to an alien world. The accumulator marches its way north to Los Angeles sucking up energy from power plants along the way under the command of the possessed Dr. Elliot.

There are few mediocre touches in ‘Kronos’. Where it is good it is very good and when it gets silly, it is very silly. By now the concept of alien possessions were familiar but, perhaps because of the way it was filmed including the black and white photography, this one was particularly effective and chilling. The accumulator itself, vaguely humanoid and vaguely electronic looks like something very alien. It looks a lot like a vertical cylinder supporting two boxes, one over the other. At the corners of the lower box are pistons that look almost like legs and pump as the thing moves. At the top is a spherical dome and two antennae. It looks almost like some cubist image of a human. The accumulator starts a hundred feet high and grows as it collects energy. If this machine is to be considered a monster, it is one of the most intriguing monsters of the 50s Science Fiction film.

As expected for cheap Science Fiction films of the 50s, there is plenty of stock footage. This time the footage is of V-2 launches or whatever the V-2 was called when the United States Army tested with it.

When we find out what is going on there is a basic problem with the idea that the aliens are collecting energy to turn it into matter. By Einstein’s famous E=MC2 equation, a lot of energy turns into not very much matter. That is what the C2 says. To have the aliens soak up the energy of the exploding H-bomb, they will get back only the mass of the original bomb or less-probably considerably less. That is just not enough mass to do them much good. They refer to this change as ‘anthropic conversion’. Nobody in physics has ever heard of ‘anthropic conversion’. Nor does it make sense in the finale to say that omega particles will reverse the polarity of the accumulator. But all this silly talk is part of the fun. I think the audience gives the story the same sort of latitude we give ‘Star Trek’ to invent a little science as needed.

The score for ‘Kronos’ was written by Paul Sawtell and Bert Shefter. The sound is big and brassy and at the same time tense and exciting. For a particularly weird effect it uses theremin squeals.

In spite of the places where the visual effects contradict the script, most of the visuals are highly effective in spite of the low budget. The proportions of the accumulator device do seem to change in minor ways depending on the scene and it might have been advisable to find a way to show the accumulator move without animating the legs in cartoonish fashion. Still, many of the effects are done on a small budget and yet work surprisingly well. I was always impressed by a scene of the huge dome of the accumulator melting. The scene is rendered very believably but, on close examination, it appears to be just a light bulb dipped in wax. When the bulb is turned on, the wax covering melts down revealing the bulb beneath. There are odd effects like a sort of electronic haemorrhage. The movie has a title that says it was filmed in Regalscope. When Fox filmed in black and white but widescreen in a format that would otherwise be Cinemascope and that was called Regalscope.

In spite of low budget touches and some silly dialogue, this film still has a lot to offer. I rate it a +2 on the -4 to +4 scale.