This book was first conceived as a comic series, back in the 1980s, when Mark Ellis was the primary writer/ideas man for Adventure Publications. Ellis states in his ‘Author’s Note’ that he was asked to create a super-hero team following the dark, ‘adult’ tone of Alan Moore’s ‘Watchmen’.

He wasn’t greatly interested in copying the style of ‘Watchmen’ but he did want to write a super-hero series, so he created a premise for a series that dealt with public domain characters from the Golden Age, some of which were drawn in the 1940s by Jim Mooney, who was to be the artist on this project. To cut a long story short, Malibu bought Adventure Press before Marvel bought Malibu and the project died at birth. 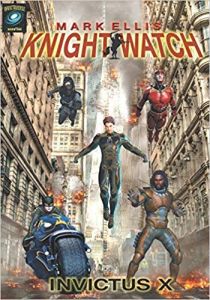 Almost forty years later, Ellis noted that ‘super-hero SF’ had become a thing, partly driven by the success of the Marvel Studios films and he saw an opportunity to revive the concept. My initial idea for how to approach this review was to read some of the original comics first. Being public domain, most of them can be downloaded in scanned form for free. Frankly, most of them were a bit of a trial to read. Comics didn’t tend to be all that sophisticated back then, even those from the bigger publishers, whose characters are protected by copyright and trademarks, much less these largely forgotten creations.

Add to that the fact that, apart from the prologue, this story is set in the present day and most of the characters are not the original versions and I soon decided I didn’t really need to read all that old stuff first. In the case of one character in particular, Samson, I admit I had wondered what possessed Ellis to want to revive such a lame character. The changes he made to make the character work for a modern readership and the reasons given to explain the original comicbooks, which actually exist in this world are very clever.

This book is absolutely not based on the dark ‘Watchmen’ style, although that work definitely informs the story. It’s just less of an influence than everything else from 1960-70s super-hero team books, 1930-40s pulp fiction, those aforementioned Marvel Studios movies and pretty much all of the other things Ellis has enjoyed and absorbed over the years. The thing Ellis did take from that original brief was to keep the pure fantasy to a minimum. Set the story of these fantastical beings in an otherwise realistic world. In this, he’s pretty successful. The Justice league Of America never had to deal with the post-battle paperwork!

I confess it took me a short while to get into the story, as one of the major action scenes takes place before I’d had much chance to get to know the characters. That situation is addressed pretty quickly, though, and I soon found myself hooked. One thing that had occurred to me when I started was how hard it would be to translate the sort of super-hero fight scene that looks so spectacular on the page of a comic into pure text. Ellis actually handles this element very well indeed. If anything, I think I might have preferred to get to know the characters in solo stories or at least smaller groups before the big group book.

For the most part, I prefer super-hero teams that are made up from established characters over the ones who come fully-formed, albeit there are exceptions. As previously stated, these characters or their predecessors were established individually in the 1940s, but that doesn’t help if you haven’t read those adventures, which I suspect few who read this book will have any great interest in doing. It does look, from the book 2 advertisement in the back, that a solo adventure for The Scarab may well be coming up next.

I’ll certainly be interested in seeing it, as Ellis has set up an interesting super-hero universe, which could stand as the basis for a major series of books for as long as readers maintain an interest.