Despite having been a fan of Mike Carey’s work for quite some time, I am, perhaps one of the few people to have neither read nor seen the film version of ‘The Girl With All The Gifts’. While I do intend to rectify this situation at some point, I was actually grateful, as it allowed me to approach the first story in this collection, ‘Iphigenia In Aulis’ with no preconceptions. I’m almost tempted to say very little more about it, but I suspect most readers of this review will know more about the novel and film it was expanded into than I did.

I have never been reticent about my antipathy for zombie apocalypse stories. They usually bore me rigid. I don’t know if ‘the Hungries’ in this tale are actually zombies, but they appear to be mindless flesh-eaters, who do pass their infection on to their victims. Carey makes very clever use of the Christian Right’s views on abortion and the rights of humans starting at conception to explore the concept of the babies of infected women.

I was, frankly, blown away! Powerfully written, exciting and emotional. ‘Iphigenia In Aulis’ has everything I could ever ask for and most certainly joins that small list of stories that will stay with me for years. My only worry at this stage of the collection was whether or not Carey could follow it. 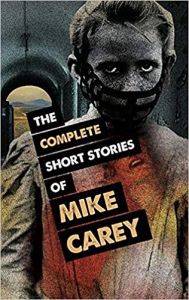 Thankfully, the quality does not drop in ‘Zuleika’. I was on more familiar ground here, as I’d previously read and reviewed ‘The City Of Silk And Steel’, a novel co-written by Carey, his wife, Linda and daughter, Louise. Zuleika, the 14 year-old girl assassin, whose origin is told here, is one of several fascinating characters in that novel. It’s set in a world, where women are about as unequal as they could possibly get. I found myself rather wishing it was a little further from our reality than it is. It’s a powerful, moving tale, told with skill and enough humour to temper the potential bleakness.

Carey freely admits that he didn’t get C. August Dupin’s voice and character quite right in ‘The Sons Of Tammany’. He’d allowed himself to become far more interested in the real world events that formed the background of this tale. I’d also have to add that I found the narrator deeply irritating in his habit of referring to Dupin by a series of increasingly puerile, variants on his name.

Since the narrator was Thomas Nast, a real life political cartoonist of the period, I found myself wondering if the silly name usage wasn’t in fact based on what Carey saw in Nast’s cartoons from the period, in which case it’s forgivable, but none the less tiresome. Thankfully, this ceased fairly early on in what turned out to be a very good story about how Nast was set on his path of using humour to influence public opinion on the corruption that was rife in the government at that time by his meeting with C. August Dupin.

Having set one story about a French detective in New York, Carey sets the next one in Paris, sort of. ‘We’ll Always Have Paris’ is three things. Firstly, it’s a zombie apocalypse story of sorts but, again, very different from the bulk of that genre. Secondly, it’s one of those multiverse stories, wherein various realities are bleeding into each other, again, sort of. It’s actually set post-apocalypse and deals with a situation that no one could have anticipated after the zombie threat was defeated. Thirdly, it’s brilliant.

Carey continues with his successful efforts to prove zombies can be interesting in ‘Second Wind’. The zombie in this case is Nicky Heath, a stockbroker who had taken steps to ease his transition into undeath, once he’d accepted that a fatal heart attack was inevitable. Heath is a supporting character in Carey’s ‘Felix Castor’ series, which I have been meaning to read for some time now. There’s just the one offhand reference to Castor in this story and he’s not even named, so rest assured that you don’t need to be familiar with those books to appreciate this story and there is, indeed, much to appreciate here. Heath has taken great steps to ensure his survival and solitude, but someone manages to get in. The development of their relationship and the way it ends are genuinely moving.

As well as the prequel origin story of Zuleika, this volume includes all the ‘stories within the story’ that Carey wrote by himself for the two collaborative novels, ‘The City Of Silk And Steel’ and ‘The House Of War And Witness’. There are others, written by either Linda or Louise Carey, which are not included here. ‘The Demon In The Well’ is very much in the style of the classic ancient fables and, as such, works pretty well. I was also reminded of the fantasy writings of Lord Dunsany, which can never be a bad thing.

‘My Life In Politics’ is a ghost story, but it’s one of those ghost stories where it’s left to the reader to decide if the ghosts are real or in the protagonist’s head. It doesn’t really matter. The ghosts are not the monster here. Carey states in his introduction that, ‘I think Tom Peverill is the vilest character I’ve ever created.’ Where this gets really scary is when we realise that Tom Peverill is by no means an exaggerated villain. We all know of politicians every bit as vile in real life and they are winning elections! So, yes, it’s very political and, as such, might not sit well with those who believe that taking a hard line against immigrants is more important than human rights. It’s also a very moving look at the way a true innocent sees the world around her.

In the intro to the short piece, ‘The Tale Of Salt-Carrier Va’, Carey states that, ‘In my opinion, forged by a fair amount of experience, you don’t make your audience feel something by telling them what they should be feeling. A dispassionate, stripped-down style at moments of high intensity pays massive dividends. If you want to break your readers’ hearts – and sooner or later, if you’re a writer, you will want to do that – then leave the violins in their cases and keep a straight face.’ I’d say he more or less proves his point in this story.

Mike Carey used to write super-hero comics. He’s not really planning to go back to that any time soon, but he was invited to contribute to an anthology of super-hero stories, which gave him the chance to create his own universe where 10% of the population had gained super powers. ‘The Non-Event’ is a clever idea that starts out tongue-in-cheek with characters who have some very silly super-powers, but soon turns very serious. It rather made me wish Carey was one of the authors involved in George R.R. Martin’s ‘Wild Cards’ shared universe. I believe he could contribute a lot there.

‘In That Quiet Earth’ is another zombie story. This time, it was written for ‘Nights Of The Living Dead’, edited by Jonathan Maberry and George Romero, an anthology of stories set within or at least compatible with George Romero’s ‘Night Of The Living Dead’ universe. I actually loved that original 1968 film, but my interest in the zombie sub-genre paled rather quickly after that. Carey, of course, has found yet another entirely original way of looking at the zombie plague, with his grieving scientist taking some very unusual steps to reunite with his wife.

‘The Gold Of Anwar Das’ is another from ‘The City Of Silk And Steel’, so I had read it before. It certainly holds up as a standalone piece. I found myself thinking that the world would very possibly be a better place if ex-camel thieves of Anwar Das’ calibre were appointed as ambassadors here.

‘Take Two’ was written for a national newspaper’s magazine section in response to their request for an ultra-short story on any theme Carey fancied. Carey went for a riff on the Garden of Eden. It was then rejected for fear of insulting the religious sensibilities of their readers. It’s actually very funny.

‘Face’ has also been published as a comic-strip, although I haven’t seen that version. Despite the alien world setting, it is actually a story about the British rule in India. As Carey states in his brief intro, the moral is not stated but should be obvious to the reader. The skill with which Carey gets into the head of Governor Plenipotentiary and Colonial Legate First Class Melchior Tavel is very impressive. Like those who presided over the foreign lands, they invaded in the days of the Empire, he has no concept of the harm he does. One can actually sympathise with his actions to some extent, until one sees him interact with his daughter, which puts his motives seriously into question. This is one of the best stories in the book.

‘The Ordeal’ is from ‘The House Of War And Witness’, as with the others, it works perfectly well as a standalone tale. This time it’s set firmly within the historical fiction genre, albeit it’s not recommended to try the protagonist’s little trick with chemistry at home. It’s a powerful tale of religious bigotry, told by a ghost.

‘Taproot’ is a story Carey wrote on commission, based on a postcard bearing a photograph of Istanbul’s Hagia Sophia, a building that at various times has been a church, a mosque and a museum. It immediately supplanted everything I’d read so far as my new favourite piece in the collection. A sick young woman, becomes aware of her father’s political sympathies at the same time she discovers her roots on her mother’s side. It’s a very powerful tale, which really stirs the emotions, assuming the reader is not a Nazi sympathiser.

I would like it understood that the events described in ‘Reflection On the Critical Process’ in no way influenced this review. I took this tale of an author’s revenge upon a pitifully arrogant, spiteful idiot of a reviewer in the way it was intended, an amusing story, not as a threat. My positive comments on the rest of the book are genuine.

The most recently written story in this collection is ‘All That’s Red Earth’. It’s another tale told from the viewpoint of an innocent and Carey has a real talent for finding the voices of such characters. It’s a really strong story about bigotry, stupidity and the problems brought on by gender identity. Carey mentions in his intro that he’s tempted to expand it into a novel, as he came to do with ‘Iphigenia In Aulis’. I rather hope he does.

Rounding out this collection, we have one final offering pulled from ‘The House Of War And Witness’. ‘The Soldier’ is narrated by a ghost to other ghosts this time. It’s a tale of friendship, love and the harsh realities of growing up. It has a twist ending which I can’t deny I saw coming a mile off. Honestly, I doubt it was likely intended to be a great revelation, as it’s hardly the point of the story. I suspect Carey would have been worried about me, had I not seen it coming.

All in all, this is a strong collection, with stories of varying setting and styles. Carey’s writing is of a very high standard and the editors should probably be congratulated, too. It’s not often in this day and age that I read a book, a review .pdf to boot and notice no errors.