There were a couple of factors I wasn’t aware of when I accepted a pdf review copy of this book from PS Publishing: Firstly, that it was actually a new edition of a book that originally came out just over 20 years ago. In fact, this is the first book release of the complete, restored text of the novel, which was published by Hodder & Stoughton in 1998.

That particular year had seen a collapse of sales in the horror fiction market, after the boom of the 80s. Authors were being dropped by the big publishers by the dozen and Laws reports that this novel also suffered from a rotating editorial staff, who all had their own views on what was best for the book. Scenes were cut, which Laws strongly disagreed with, but he lost the battle. The publisher was contractually obliged to publish it, but they needed it to be at minimal cost to them, which obviously led to a desire to reduce the size and therefore the unit cost by as much as possible.

There was no publicity provided and the paperback was rushed out as fast as possible after hardback publication. I imagine it went out of print fairly quickly. Twenty years later, PS Publishing conducted a survey of their readership/customers and asked them which horror novel, now out of print, was the one they’d like to see again in a special edition. ‘Chasm’ came out top of their list. 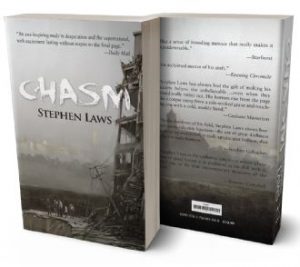 The second thing I wasn’t quite prepared for becomes rather obvious when armed with the above information. It’s a big book! It’s a whopping 567 pages long! As a rule, I generally tend to prefer shorter novels and novellas. Nevertheless, I dived in. We are introduced to several characters who, in moments of extreme stress, find themselves caught up in massive earthquakes.

We are introduced to the main protagonists individually as the cataclysmic event which completely upends their lives takes place. It has to be admitted that none of them have particularly great lives in any case. This is very much a story about how people may or may not be able to step up to the plate when the going gets bad. The question is would they survive this or would they all die?

The main first guy we meet, Jay O’Connor, is a loser. In the years which follow the event, he is forced, very much against his will, to become a leader, even a hero. Alex and Candy Stenmore have a marriage that it would be kind to describe as dysfunctional. They’re failing to cope with the death of a child, so that’s understandable. Gordon Thanwell can barely speak.

He started out with a stutter, but has since regressed even further. When we meet him, he’s a recluse who locks himself away and plays his guitar. Annie and Lisa are a pretty cool lesbian couple. More together and practical in the face of disaster than the others, but they’ve also had issues to deal with…and still do. Damon and Wayne are the sort of local youth you’d object to your daughters bringing home.

What at first seems like a natural or unnatural disaster that causes a huge chasm to swallow up large portions of Edmonville soon shows itself to be far more complicated than that and much worse. Then we get the weird stuff: the Vorla and the Cherubim.

As much an after-the-holocaust survival story as it is a horror novel, we watch these disparate people struggle to stay alive, as they gradually discover how bad their situation really is. They eventually add others to their group and, inevitably, meet survivors who are less friendly.

It’s not an easy book to talk about without revealing too much detail. When certain characters turn to the dark side, it’s not really that much of a surprise. I don’t believe the author really intends it to be, it’s more comparable to watching a crack grow wider prior to something breaking, so that’s no great of criticism. Laws writes so well that he manages to slip an idea like the Cherubim by me, despite the fact that it initially seems a little silly. I found myself wondering if there wasn’t a slight influence from those nasty little dolls in the ‘Barbarella’ movie. Everything eventually starts to take on a somewhat cosmic element as the story progresses.

I can’t help but think this book could be something of a gift to fanfic writers, as I felt there was so much left to explore and expand upon. Laws apparently has no intention of revisiting this scenario, no big surprise there, as he’s never been a series author. I found that disappointing to some extent but, on the other hand, it’s often best to just leave the readers wanting more, which he certainly did in my case. In conclusion, I think the best recommendation I can give is to say that I finished this rather long novel in just two sittings.