Even I take a second look at just what a title such as ‘How Nature Works: Rethinking Labor On A Troubled Planet’ means. Subjectively, it is employers using as few workers as they can and/or not paying them enough. In many respects, it also means that there is little in trained expertise in the welfare and harvesting of plants or their products to ensure that there is a good crop. When you read about this when related to the tea plantations, I think you’ll be wondering what you might be drinking.

For those on a meat-free diet will also be made to think about how much forest land has been removed to grow soya which kind of works against your reason to save animal life. Reading here, means the more people take on the vegan life, the more species risk extinction in pretty much the same way as where palm trees are being grown. All this and we haven’t even gotten to the labour force not being paid well or properly for the work they do. 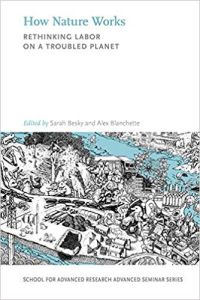 I think as I read this book, the more it becomes apparent that throughout the world just how cheap labour is seen in the third world. There are no medical benefits. If you’re ill then you don’t work and don’t get paid. If you have serious medical conditions you really are in trouble. No pension plans neither. Exploitation is rife even in places like you don’t expect like Borneo and the orang-utan sanctuaries.

Don’t expect this book to be all about human workers. Jake Kosek’s examination of the honeybee in the USA clearly points out that they do not benefit from plant fertilizer and insect deterrent sprays and its effect on their population and also their honey. Collecting pollen from almonds makes for an unpleasant tasting honey so not fed to humans. Even so, you do have to wonder what else can affect honey and what you end up eating. Considering the rapid decline in bee populations around the world and how much we rely on them to cross-fertilise plants, there is a serious argument to make sure something is devised to make the bee population safer.

Please be warned you need a hard stomach for the final chapter where there are descriptions of chicken and goat slaughter in America. Whether what its writer Naisargi N. Dave saw is done world-wide is left to you to contemplate.

There’s a lot to think about in this book, more so as it also covers more than humans. We might be able to do without humans but vegetation needs bees. Insecticides have an effect on more than the target species and more needs to be done to preserve the species we really need.

As you should surmise, this book will make you think. We all like to think we pay a reasonable rate for our fruit and vegetables but certainly not at the cost to the labour force. Read and think.