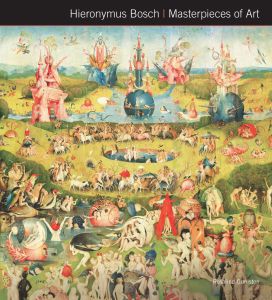 When I started reading ‘Hieronymus Bosch: Masterpieces Of Art’ by Rosalind Ormiston, I had to have a bit of think where I first saw his art and with ‘The Temptation Of Saint Anthony’, it dawned on me it was in the first and only volume I bought of the original issue edition of ‘Man, Myth And Magic’ back in the early 1970s.

If you think Hieronymus Bosch is a mouthful, his actual name is Jheronimus Anthonissen van Aken. The ‘Bosch’ surname is actually a town in the Netherlands where he was born. Although born either in 1450 or 1455, his death in 1516, possibly of the pleurisy epidemic there at the time. He came from a family of artists, so hardly surprising he took up the same profession.

Writer Rosalind Ormiston points out that although Bosh is known for his pictures depicting the devil, he actually did far more depicting more religious scenes. His art does vary a lot and only 25 paintings and 19 drawings remain. Looking at them, some look distinctively flat and a disregard to perspective when drawing tables being a giveaway. However, other paintings show he can do it, so there is a distinction between being painting realistically and stylistically, even that far back. Certainly, the fantasy aspect of his work should bring him to your attention.

If you wonder how Bosch’s art can be expanded to 92 pages, there is a mixture of enlargements and art attributes to his studio. With the former, you have to take into account that much of Bosh’s work was done on panels so enlargements is the only way to see the detail. It isn’t unusual back then for artists in his studio to emulate his style and no doubt used to keep up with commissions. The Grand Masters certainly employed such tricks. It should be fun for some of you to see what differs these from Bosch himself. Certainly, looking at his pencil work, he practised his figure and animal work for composition. He has a certain amount of quirkiness with his work that appealed in his time and even now. Bosch should certainly be on your list of fantasy artists to add to your collection.