I did ask publisher John Morrow a while back why there were no more Companion books after this ‘Hawkman Companion’ and told the licencing from DC Comics had become prohibitively expensive. If you have the earlier ones, then it’s inevitable that you would want to look at their final volume, release 12 years ago and a shame because we’re missing out on histories of the likes of Wonder Woman, Green Lantern and Green Arrow. 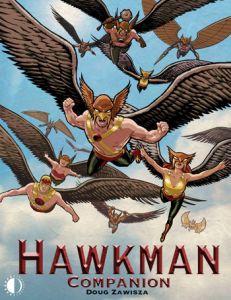 Although the first Hawkman appeared in Flash Comics # 1, you can’t get away from the fact his creation was based off the birdmen in the Alex Raymond newspaper strip, ‘Flash Gordon’. Unlike those birdmen, Hawkman could take his wings off and owed his origin to Horus from Egyptian mythology as he and his wife keep getting reincarnated after a curse from Hath-Set. From earthly origins, his Silver Age counter-parts were alien from Thanagar but still looked human, still reincarnated, and he and his wife were police officers on Earth and both could take their wings off.

Even so, you do have to wonder. Essentially a bare-chested hero with no other attributes that nth anti-gravity belt buckle and a selection of ancient Earth weapons that basically bludgeon his foes. From the various interviews with writers and artists, I think they are struck more with their look than limitations.

However, when writer Doug Zawisza interviews the various people involved in the Hawks creation, you do get some insight the shenanigans of creator credits from his original artist Sheldon Moldoff that will make you think only there but with EC Comics and his idea for a horror stolen with no recourse over it.

Considering there were only two Hawkman and Hawkgirl/woman on two Earths, often wearing similar costumes, it’s more amazing people didn’t get confused as to which was which. As their first artist Shelly Moldoff points out the only gimmick they had was to fly. I would add to that, their nth metal gravity device meant they didn’t even need to have wings. After all, it’s the same material used in the Legion Of Super-Heroes flight rings.

Zawisa gives a list of other winged comicbook characters, although oddly missing out Marvel’s Condor super-criminal, although granted he was only a minor character. In some respects, I think he should have divided them up as those with natural wings are not in the same class as those with mechanical wings like the Hawks. Oddly, one common denominator is none of them have weapons until Angel became the cyborg Archangel.

Seeing the list of Thangarian words, I expect Barry Allen and his successors are glad they haven’t been there as ‘flash’ means ‘kill’.

Writers William Messner-Loebs and Dan Jurgens have also been struck by Hawkman’s choice of weapons pointing out you would wanted to be attacked by a mace again and no one had really explored how vicious fighters these Hawks are. Oh, my favourite picture in the book has to go with the Hawkman sketch on page 126 by Steve Leiber.

I came away from this book with a lot more gaps filled about my knowledge of Hawkman. Bear in mind this Companion book is 12 years old now and changes in characters as well as Hawkman not always having a bare chest not but armour and metal wings came around the same time or later but wasn’t dwelt on. Even so, the one thing that is never really discussed are the wings. We know they are mechanical but they act real when attached.

I would have liked to have know if there were cyborg implants or what else that made them move involved. The nth metal makes its users buoyant in the air but it is the wings that propel them along. I do think I have a better handle on how his full hawk mask is drawn now but still think Hawkgirl has the better look. Don’t fly away.