Although reference is given to the film ‘Top Gun’ to the US Navy’s jet, the F-14 Tomcat, it isn’t a film I’ve seen that got me interested in the aircraft. Instead it was watching the 1980 SF film, ‘The Final Countdown’ which struck me with their use on the USS Nimitz as the aircraft carrier got swept into the past for a brief 24 hours. If you’ve never seen the film, check it out because it also gives insight into how life on an aircraft carrier was carried out then and seeing a pair of Tomcats in flight. 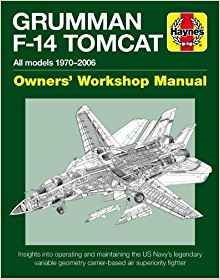 Created by Grumman Aircraft Corporation, the F-14 Tomcat was only designed when the F-111B failed to live up to expectations and won from amongst 5 companies. The USN didn’t want it to be called a ‘Tomcat’, although all previous Grummen military aircraft had ‘cat’ in their names but with three flag admirals called ‘Tom’ noted, sounds like a touch of ego that got the name through. What I found interesting is next to the SR-71, the F-14 is the next significant aircraft to have to most titanium used in its structure. Likewise, the distinctive twin dorsal fins was to reduce its height for hanger space on the aircraft carriers.

The variable geometry wing shape tends to change automatically to the speed the Tomcat flies at and can only be manually controlled at low speed. The specs given also show it’s really a big aircraft and has the nickname ‘the Big Fighter’ and was popular with all its air crews. A photograph showing a maintenance officer inside one of the intakes with room to spare, is a sharp reminder just how big the Tomcat was.

Throughout this book, there are the various emblems the various crew wore and one by Milton Caniff, who drew ‘Terry And The Pirates’.

In combat, the enemy tended to fly away than risk a confrontation with the Tomcat, so you do have to wonder about the value of its film exposure. It’s aero-frame was flexible enough to turn it into a successful high speed bomber so was really multi-task. What ultimately took the Tomcat out of service in 2005 was the time taken for some of them in maintenance which made it uneconomic.

Pilot Instructor Doug Denneny who was one of the crew trainers gives insight into what they did with the student pilots on and off-shore. This gives a lot of detail of the work and flying hours they have to put in and Denneny explains it is practice that made them good.

Bill Lind explains his role of the Radar Intercept Officer (RIO), the man behind the pilot, on the Tomcat. A couple interesting details is if they are attacked then they out-sped the missile so it ran out of fuel. It was also important to choose the aircraft over any attack but when you see the original cost of the Tomcat that’s understandable. These kinds of insights apply to any aircraft so if you’re planning stories with aircraft you do learn a lot of background detail that you wouldn’t normally have access to. Further into the book, RIO Dave Baranek gives his experiences of practice sorties and how two Tomcats act in tandem.

Daniel Dixon goes over Tomcat maintenance. The problem for any aircraft on an aircraft carrier is sea water corrosion and they all get a wash with a compound to protect them.

If there is any criticism then I wish there was a glossary to make it easier to check off the various initials used. You can find them by reading the book but keeping them all in your head at one go can be a bind.

Saying that, you will come away from this book with a lot of background knowledge of the Tomcat and has made me interested in what came before and after. There is a certain elegant grace about any aircraft that can change its wing geometry to match its speed so I can appreciate its popularity.