‘Endgames’ is the twelfth volume in ‘The Imager Portfolio’. Set in a secondary fantasy world, it’s only variation on our own frail humanity is the presence of Imagers who have super-powers based on their ability to control matter. They can form bulletproof shields around themselves and also bend light so they are hidden from view. Only very few have these talents and they used to be persecuted but, over the course of the series, have formed themselves into a Collegium and become a major power in the state, supporting the Rex of Solidar. Other important groups are the High Holders – a kind of landed nobility jealous of their ancient privileges, factors – increasingly wealthy merchants, manufacturers and poor craftsmen and workers. The setup is analogous to England at the dawn of the industrial revolution. 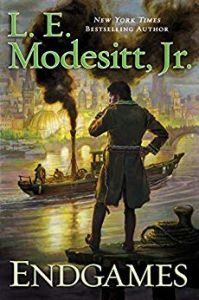 ‘Endgames’ continues the history of Solidar but the third person narration is tightly focused on Charyn, not an Imager but now Rex of his country following the assassination of his father. Charyn tries hard to be more flexible than his predecessor, more aware of the interests of the various factions and how they might be balanced to keep the peace. He is also more sociable than his father, holding various soirees and balls to make both High Holders and Factors feel valued by the Rex and less hostile.

It’s not easy. The High Holders and are wary of the rising merchant and manufacturing classes. Some merchants are as wealthy as High Holders and even lend them money. The manufacturers are growing richer by mass producing goods that can be sold cheaply but crafters and the old guilds are disgruntled because no one wants their more expensive wares. The mills employ children and put men out of work and even the adults employed are paid starvation wages. A steam engine is being developed that may make things even more complicated.

There’s also a religious dispute. A new movement called the True Believers are attacking the Anomen where The Nameless is worshipped, outraged that the Choristers who run them are living very high on the offerings of the congregation, money that should be used for good works. Choristers are meant to live simple, holy lives not have fine robes and rich food. This parallels the Reformation when the Catholic Church came under attack on similar lines. Modesitt is mixing the troubles of the 16th century with those of the 19th to give Rex Charyn a particularly hard time.

As usual, both the Factors and the High Holders on the Council want Charyn to do more to repair flood damage, protect factories from disgruntled crafters and workers, build new ships to protect merchants and fight pirates and so on but none of them wants to pay more tariffs.

Charyn also suffers from bad press. There are two news sheets. Veritum does straight factual reporting but Tableta is more opinionated, clearly on the side of the crafters and workers and usually referring sarcastically to Charyn as ‘our beloved Rex.’

So Charyn lives in constant fear of assassination and is especially concerned because his heir is his younger brother, Bharyn, who chastises him for not being firmer with the rabble. Bharyn likes a drink, believes strongly in the rights of High Holders and would send the army in to shoot any troublemakers. He would make a terrible Rex, so Charyn, keen to get a better heir, is courting Alyncya, a High Holder’s daughter of whom he is fond.

Charyn is a nice, serious fellow, working hard and trying to do what’s right. The supporting characters are well-drawn. His enemies are not necessarily evil but they are selfish, putting their own interests or those of their faction above the needs of Solidar as a whole just as aristocrats, businessmen, financiers and workers do in real life,

The story unfolds very slowly over six hundred pages. As usual with this author, the form is tight third-party narration firmly fixed in the viewpoint of the main character and we follow him through his daily life. Much of it consists of dinner parties, meetings with advisors and trips to church, Council meetings and pondering over laws and the role of the state. Fantasy readers more used to gods, demi-gods, heroes, monsters and quests may find this boring whereas people interested in politics, ethics and the role of the state in the real world will probably enjoy Modesitt’s fantasy analogues. I do. Usually, as here, the slow set-up prepares the way for a tense and thrilling final act where everything comes to a head.

I sometimes wonder why Modesitt doesn’t just write straight political novels set in the real world. His blog shows that he certainly knows enough about it and he worked in Washington as an advisor a few years ago. Perhaps he thinks it’s more effective to put his sensible opinions across in a fantasy setting or perhaps he just likes the genre. In any case, reading him is always a pleasure.