Now, here’s a little test for you. Name some early British women illustrators and cartoonists. Off the top of my head, I only had two: Beatrix Potter and Mabel Lucie Atwell. In the past 150 years, America has the same problem or so I thought.

Martha H. Kennedy’s very large book, ‘Drawn To Purpose: American Women Illustrators And Cartoonists’, should remedy your knowledge for over the pond. The comment made by cartoonist Howard Pyle in 1890 that women cartoonists marry and end their career is something you would think was more modern. It’s not. In fact, many of them do both. 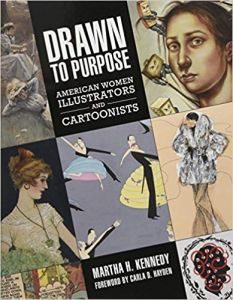 However, as this book shows there were several, often British migrants like Frances Flora ‘Fanny’ Bond Palmer (1812-1876), Mary Hallock Foote (1847-1938) and Anne Harriet Fish (1890-1964) who weren’t born American. The list then grows. In fact, most of the woman artists here drew and painted and had families along the way. Many of them also married other artists as well.

These early lady artists illustrated children’s books or had art appear in magazines and newspapers and have been kept up by their successors. Kennedy’s book is extensive showing the full range of where they appeared. Seeing the samples here, they were certainly as good as any man.

Art is clearly not dependent on which sex you are. One detail that isn’t acknowledged and would have been interesting to compare for each decade is how many female to male artists there were working. I have a feeling that it still wouldn’t have reached double numbers very often.

Of course, with the turn of the 19th century, job opportunities changed somewhat. Rose Cecil O’Neille (1874-1944) created the ‘Kewpies’ for ‘Ladies Home Journel’ looks like the first lady cartoonist in print and merchandise. Jackie Ormes (1911-1985) the first black woman cartoonist with ‘Torchy Brown’.

The most syndicated newspaper cartoon strip ‘Brenda Starr’ was Dale Messick (1906-2005). Oddly, Ramona Fradon (1926-) gets her only reference here working on ‘Brenda Starr’ when you would think she would have been given some space for being the first lady penciller at National Periodicals/DC Comics for many years on the likes of ‘Aquaman’ and ‘Plastic Man’.

It goes without saying that the late great Marie Severin (1929-2018) has her career covered. As does Trina Robbins (1938-), although it isn’t noted that she also designed Vampirella’s costume.

Seeing lady artists in everything from court sketching to caricature and political cartoonists, many of whom also won prizes, something did occur to me, none of them ever used male pseudonyms or opaque names or initialising their forenames like we have in our genre so you could tell what sex they were. I also wondered why the lettering line measuring guide doesn’t appear to be part of their equipment.

Granted, there is an argument that they might have preferred stylised wording or someone else doing the lettering so let’s call that an observation. They might simply have followed the male artists in doing this and the sometimes absence of word balloons.

There is a 42 page list at the back of the book covering the various credits for these artists. I wish there were more photos to show what they looked like but that might have increased the page size and this is already a massive book.

This is the kind of reference book you want on your shelf no matter which sex you are. It is a mine of information and includes a list of books to look up in case you want to dig deeper. Although I’ve noted some of the earliest female artists, I should point out that it does go up to date. If anything, it should encourage any lady artists out there that you can break into the various art fields out there and make a successful living.