Back in the 1960s, after the success of the Daleks and the Cybermen, there was a need to go on a roll and create another repeatable adversary for ‘Doctor Who’. Enter the Ice Warriors. The Earth is suffering a second ice age when it removed vegetation to make room for real estate when the humans foolishly forgot the carbon cycle. Around the world there are computer-controlled Ionisers to break down the carbon dioxide only the base ran by Clent (actor Peter Barkworth) is breaking down. Hmmm…I wonder why no one has thought of that today although with my scientist’s hat on, unless tuned in on a particular molecule, such a device would also break up the molecules of other compounds unless that is the intent to make a less toxic gas.

The TARDIS falls on its side when it arrives but the Doctor (actor Patrick Troughton) is less concerned with that when he takes Jamie (actor Frazer Hines) and Victoria (actor Deborah Watling) into the building and solves their reactor problem and saves a catastrophe from happening which gets their leader Clent (actor Peter Barkworth)’s attention and stops all three of them being shipped off to ‘safety’.

In the meantime, Arden (actor George Waring) and his team, while laying sensors, discovers a humanoid body which they think is a giant Viking. When it is thawed out back at the base, this ‘ice warrior’ later called Varga (actor Bernard Breslaw) recovers, kidnaps Victoria and returns to the base of the glacier to release his spaceship and crew using the device that restored him. If they cannot return to Mars then taking over the Earth would be the next objective on their list.

Interestingly, there is an unknown stalemate after the Doctor sorts out the problems with the Ioniser, using Eric Penley (actor Peter Sallis)’s Omega formula after Miss Garnett (actress Wendy Gifford) managed to find him living out in the wilds. However, to use the Ionizer without knowing the type of engine that the Ice Warriors have in their spacecraft could cause bigger problems like a massive explosion. Remember what I said in the opening paragraph about what disassociating matter can do? Nice to see it was remembered back in 1966.

Jamie and Arden to go investigate and rescue Victoria but are zapped by the Ice Warriors. The chief Ice Warrior Varga sees using Victoria as bait and refuses to have her killed by his men. Penley arrives and find Arden dead but Jamie unconscious. He takes the young Scot back to his abode and recovering, Jamie finds his legs paralysed. Storr (actor Angus Lennie), Penley’s ally, thinks the Ice Warriors being anti-scientist are his allies and…er…warms to the idea.

Meanwhile, Victoria finds Arden’s fallen communicator and contacts Clent and the Doctor. Unable to give them any information about the spaceship engines, the Doctor urges her to escape. Victoria tries and when she is finally caught by one of the Ice Warriors, ice debris falls on them, killing him and trapping her. Storr finds and releases her but Victoria is unwittingly took back to the Ice Warriors who, seeing him of no use, is instantly killed.

The Doctor convinces Clent that he is the best one to go down to the Ice Warriors and find out about their engines and on the way down, meets Penley who is looking for Storr but takes him back to see Jamie instead. A quick examination and the Doctor thinks Jamie’s paralysis will fade. He convinces Penley to take Jamie back to the lab while he goes to see the Ice Warriors who prefer to evacuate the air in the air lock than talk.

Penley gets Jamie to the human base but convincing Clent to use the Ionizer falls on deaf ears and they are stunned and placed in the infirmary. Clent and Miss Garnet are convinced the computer knows best, despite the fact that the machine will not do anything to risk its own existence.

Finally convincing the Ice Warriors that he could help them, the Doctor learns that their engines requires a mercury isotope which he says is available at the human base to divide their numbers. While Varga and two of his men go there, he and Victoria use a stink bomb, for its chemical properties than smell, to stun the remaining Ice Warrior and sabotage their spaceship’s main weapon before aiming it at the human base that it would affect the Ice Warriors more than the humans. About the same time, Penley recovers and assessing the situation, raises the base temperature, figuring that this would disturb them. Both events cause the Ice Warriors to flee back to their spaceship, missing the Doctor and Victoria on the way back. Penley over-rides the indecisive Clent amd Miss Garnet and uses the Ionizer to destroy the spaceship. Satisfied, the trio return to the TARDIS and leave, knowing that some order has been made.

Considering that there were only 4 recovered live episodes and the other two animated, ‘The Ice Warriors’ holds reasonably well together despite its low budget. I forgot how jazzy the human costumes were for that time period. The story overall is nicely structured, enforcing the idea of the use of science for good. Saying that, you would have to wonder why they would remove so much vegetation and what did they use for food?

The audio commentary for the live episodes of one, four to six is conducted by Toby Hadoke with musical chairs between actors Frazer Hines, Deborah Watling and Sonny Caldinez, designer Jeremy Davies and grams operator Pat Heigham, who provided the special effects noises. The latter gives insight into how it was done from the gallery and the Ice Warriors voices being pre-recorded because of the effort in talking in costume.

Unlike ‘The Moonbase’, Hadoke brings together interviews and such from those who are no longer with us and some who weren’t available otherwise for their own insights which makes a better use of the time in the animated episodes than jumping between them. Key amongst those for episode two was writer Brian Haynes, director Derek Martinus, actors Bernard Bresslaw, Peter Barkworth and Wendy Gifford and the reveal from make-up supervisor Sylvia James that wigs are the better option if hair couldn’t be shaped.

With the animated episode three, there is an interview with Michael Troughton (you saw him in ‘Last Christmas’) discussing his father and how much he put into his roles. Considering how I saw Patrick Troughton put seriousness into his other parts, I still find it a little odd that he could be a bit of a prankster himself but maybe I took things too seriously when I was young. From what Hines and Watling said in their audio commentaries where in rehearsals they do a comedy version with different voices and accents to get it out of their systems, I’d have loved to have heard any of them that had been preserved. I hadn’t realised that the hair added to the Ice Warriors costumes was give them something soft around their necks. Presumably, this also applied to under their arms, too.

Although there was some spotting about the changes in actress Wendy Gifford’s costume between episodes, no one seems to have noticed the growth of Peter Sallis’ beard changed considerably as well. That would have been acceptable had he been growing it but apparently it was a stick-on beard.

The extras are centred on the second DVD with looks at the sets and interviews and the problems with being inside an Ice Warrior necessitating some changes to the helmets during filming. Something I wasn’t aware of was that Bernard Breslaw came up with the hissing voice of the Ice Warriors which when you consider his normal baritone voice is quite a departure. Seeing the construction of the animation episodes is also useful.

I hope no one attempts to make the ‘Blue Peter’ advent candle holder. Even back then I wondered at the sanity of having candles so close to flammable tinsel. A fire hazard waiting to happen. I do remember the winners of the create an alien fierce enough to beat the Daleks although none of them made the TV series. Looking objectively now, I suspect the only one that might have stood a chance was designed by the youngest winner.

There is part two of an interview with actor Frazer Hines. Most of his stories I’ve heard in other formats, including audio commentaries. It would have been interesting to have heard how long before the chasing fans toned down and he could have some sense of normality.

The photo gallery has a variety of black and white and some colour photos of the Ice Warriors. Of particular interest is seeing Bernard Breslaw being turned into an Ice Warrior. I suspect the ear holes were left like they were to enable the actors to hear through the helmets.

All in all, this was a great story to see again after all these years and fill in some gaps left in my memory from that time. 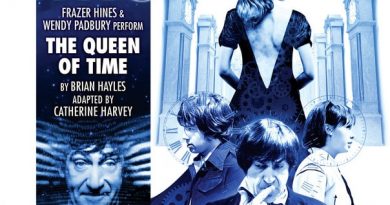