Skip to content
You are here:Home » Doctor Who: Series 12 (or 37 depending on how you count) : Episode 7: Can You Hear Me? by Charlene James and Chris Chibnall.
Doctor Who TV
February 9, 2020February 11, 2020 UncleGeoff Doctor Who - Dalek Menace 2 min read
660.8k
SHARES
ShareTweet

Everything seems to revolve around Aleppo, Syria, 1380. The year gets mentioned a couple times to remind you where you are.

Woman thief, Rakaya (actress Clare-Hope Ashitey) warns of danger from creatures that arrive when they sleep. They didn’t believe her. 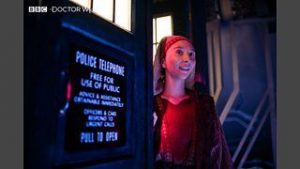 The TARDIS arrives in Sheffield and the Doctor gives her friends a day off to see their families and friends. Doctor decides to jump ahead a day, not really having anything else to do, but gets an alert to go to Aleppo and finds it deserted except for Rakaya and a creature.

In the future, the friends get visions. Ryan’s friend, Tibo (actor Buom Tihngang) tells of his nightmares that have been happening for days. Yasmin sees her sister Sonya (actress Bhavnisha Parmar), who is growing up and can now cook. Later that night she sees the old man who keeps reappearing. Likewise with Ryan only Tibo vanishes. Graham sees a vision of a planetary collision after messing up a game of cards. 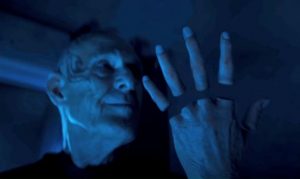 All phone the Doctorr and she takes Rayaka with her to the present and they relate their experiences. The hair sample she took isn’t in the TARDIS database. The TARDIS can lock on the image from Graham’s head and transport them across half the galaxy to a monitoring site. There is a geo-orb is preventing two planets crashing into each other. The orb is keeping someone a prisoner. While the Doctor is sorting out the contraption, the friends alone meet the old man, who claims he created the creatures who captures them all and gived them hallucinations.

The Doctor finds herself alone but finally meets the old man, Zellin (actor Ian Gelder), a mythical demon. He has tricked her to freeing Tahira (actress Aruhan Galieva) before trapping her as well. Both vanish to to Earth to feed on more human nightmares. The Doctor frees her friends and everyone else. She also points out that Rayaka created the creatures from her nightmares and uses this as a means to find the way to trace them. 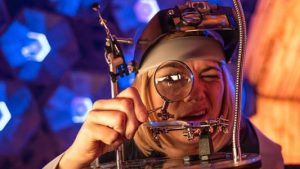 However, the Doctor transports them all to Aleppo and succeeds in trapping both alien gods back in the geo-orb. That can hardly be a spoiler cos I’m not quite sure how she did it.

This really is a very chatty episode with giving insights into the friends backgrounds. If anything, this dangerous threat is cleared up rather too easily. The goddess Tahira does really get a name check in the episode and had to look around to find it and identify her. Therein lies the problem. These are supposed to be powerful god-like aliens and totally wasted after such a build-up. Then again, I don’t think this was the point of the story, more so with the help-line given at the end of the episode.

I’m really not sure what to make of this episode. My reviewer heart thinks it could have been so much more but I think there has to be an open verdict in that you either love or hate this episode or, in my case, shrug and move on. 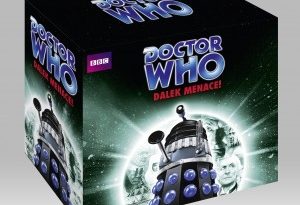