Is this really the penultimate episode of the latest season? My, how time flies, even places, because this time they are in current day Norway. Don’t step on the spoilers and watch out for the carnivorous moths. 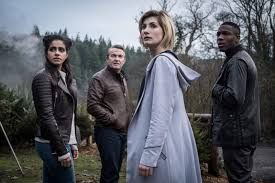 The Team TARDIS investigate what appears to be an apparently deserted house in the middle of a Norwegian forest. The Doctor lets them in with her sonic screwdriver and eventually they find the young blind Hanne who is waiting for father, Erik, to get back.

She has been told that she must keep the doors locked because a monster comes down from the woods at a set time each day. No one questions that if the doors are bolted from the inside, just how did Erik get out? Before anyone says Hanne locked the doors. The top bolt was above her hand height and not a chair in sight. 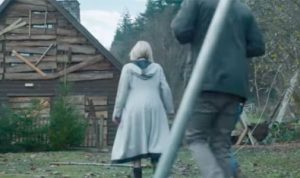 In the attic, Graham and Ryan find a mirror that doesn’t reflect until the Doctor uses her sonic screwdriver and reveals it to be a portal. Leaving Ryan to take care of Hanne, the Doctor, Graham and Yaz pass through the portal to an intermediary dimension, encounter a potentially dangerous alien that wants to trade information for the sonic screwdriver if he shows them where Erik went. There are also a lot of carnivorous moths around and he has the only light. You really must ask yourself why the Doctor never carries a torch in her coat.

Eventually, they get through to the other side into what appears to be an identical universe but the Doctor finds it unstable. For the rest, you need to watch it for yourself. 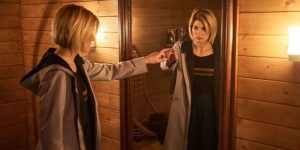 Another country, another episode. This really must be biting into the season budget, even with minimal cast. Even so, considering the outside reality of Norway is only used for a few scenes, you do have to wonder if they went there for real or whether Wales was masquerading.

This story seems to be going in several directions, none of which were correct. No spooky monster in the woods. No haunted house. What appears to be a doppelganger universe which then turns into a sentient frog-like being. This reality shares a lot in common with the 1994 film ‘Star Trek: Generations’. The only thing missing is had the Doctor kissed the frog, then we’d have had a fairy tale ending and it turning into a handsome prince. Instead, it all gets all a bit existentialist.

As commented with earlier episodes, show-runner Chris Chibnall appears to be getting his team of writers through all the main SF tropes in short order, as if he’s looking for a ‘Doctor Who’ fit. There’s nothing wrong with that and I’m all for experimentation, but he’s going to have problems doing that for another season without at least bringing back a familiar alien species at sometime or other. Not that I necessarily want to see the Daleks or Cybermen anytime soon, but I’d love a trip to Vortis.

In many respects, Erik seems crazy for abandoning his daughter although time in the alternative universe might feel different than at home and he has no idea how long he’s been away. If anything, it can’t have been more than a few days.

Poor Graham seems to have a hard time dropping his grief when things like what happened in this episode keep coming back to literally ‘haunt’ him. 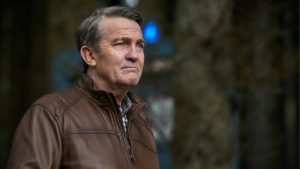 This is a very weird episode, even for ‘Doctor Who’, and it’ll be interesting to see how school teachers have to explain all the concepts, including alternative universes. Considering that this particular universe is sentient, we could even speculate that the Doctor has actually met a deity. I bet that’s never come up in Gallifreyan textbooks.

Don’t get a headwonk about the Doctor having seven grandmothers. Marriage must be touchy on Gallifrey. 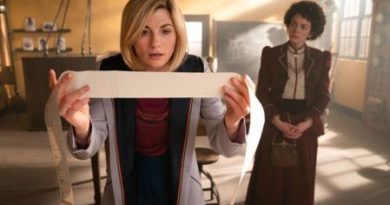 Jodie Whittake and Chris Chibnall both to exit Doctor Who (news).

Doctor Who: Flatline by Jamie Mathieson (Doctor Who review).