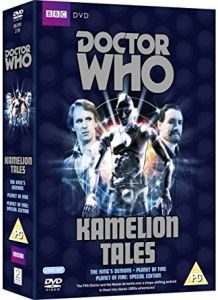 The King’s Demons by Terrance Dudley

How to sum up a two-part story where everything is so much spoiler. The date is 4th March 1215 and King John (actor Gerald Flood) is on the estate of Baron Ranulf (actor Frank Windsor) and his wife Isabella (actress Isla Blair) and son, Hugh (actor Christopher Villiers). Over a meal, King John accuses Ranulf of not giving him all his money and lays down a challenge which Hugh takes on against his champion, Sir Gilles Estram. 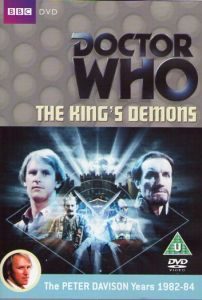 During the joust, the TARDIS arrives and King John announces the Doctor (Peter Davison), Tegan (actress Janet Fielding) and Turlough (actor Mark Strickson) as his demons and doesn’t seem perturbed that they just materialised. They accept their hospitality for a meal but Turlough goes missing. The Doctor is forced into a duel with Estram and discovers what a tangled web he’s been drawn into. From there on, everything is spoiler.

Be warned, there is something odd about the DVD and it won’t readily go from episode to episode.

The first audio commentary is with actors Peter Davison and Isla Blair with script editor Eric Saward. Information is given about the Kameleon being a real robot. However, the thing I can answer which baffled them is just how heavy is the TARDIS as it’s rather simple. The TARDIS is transdimensional so it’s heavier on the inside than the outside aspect that pokes into our reality. The Master’s TARDIS, having even less poking into our reality is even lighter.

Director Tony Virgo was away working when the first commentary was done but I’m glad he was back to do one for the first episode. He explains that after being a floor manager he passed the director’s course and this was his first gig. He praises cameraman Remi Adefarasin for the speed they got doing the outside filming. He also corrects the previous commentary in that they were doing this in December not November.

‘Kameleon – Metal Man’ in 14 minutes goes over the deficiencies of the humanoid robot. For the historically minded, the 22 minute ‘Magna Carta’ goes over why it was created in our reality. Finally, 6 minutes devoted to the ‘Photo Gallery’ which was for the studio work. Presumably they were working too fast outside to get much there.

Planet Of Fire by Peter Grimwade

The connection between the people on Sarn and in a shipwreck off Lanzarotte on Earth isn’t readily apparent. However, one object in particular shares a symbol. On the yacht, Perpugilliam ‘Peri’ Brown (actress Nicola Bryant) is eager to go to Morocco but is fooled by her stepfather, Professor Foster (actor Dallas Ford) and stuck there.

Meanwhile, on the TARDIS, the Doctor (actor Peter Davison) and Turlough (actor Mark Strickson) have discovered that the robot Kameleon is acting oddly while connected to the TARDIS’ memory bank co-ordinating them to land on Lanzarote. They go off to explore what is causing the signal they were tracking, then divide up with Turlough returning to the TARDIS so they can cross co-ordinate. However, he sees the stranded struggling Peri trying to swim ashore and failing and rescues her and the artefact, leaving her to recover in one of the TARDIS’ bedrooms. The Doctor returning finds Turlough trying to hide the device but discovers it contains a memory core. Putting it in TARDIS, it transfers them to Sarn, where they both go off to find out what is going on. 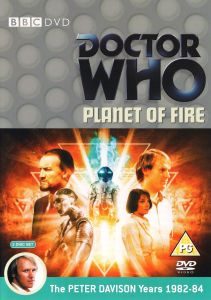 Peri recovers and finds a distraught Kameleon transforming first into her stepfather and then into the Master (actor Anthony Ainley) who is controlling him from afar and who wants her and a component from the TARDIS called the compactor. Succeeding in escaping him, she runs off with the component and hoping to catch up with the Doctor and Turlough. They in turn have met up with the Sarn inhabitants and prove to them that their volcano god Logar is going to erupt and offers to rescue them in his TARDIS. Turlough discovers the spacecraft they came on, convinced they came from his home planet Trion, proving it by showing the same symbol scar on his own arm. It is then that the senior guardian Timanov (actor Peter Wyngarde) returns and sees the people there as traitors who should be thrown into the volcano as persuaded by the Kameleon/Master.

As usual, the Master is out to manipulate the situation for his own ends and Turlough discovers he can go home again. Peri also, literally, finds her feet on the edge of a volcano and Kameleon’s fate is finally decided. There’s too many spoilers to go beyond that.

Something that did occur to me after watching this episode is the Doctor promising to return her to Earth to match her three month holiday. However, we know from ‘The Trail Of A Time Lord’ that she never returned to Earth. Her mother and step-father must have been overcome with that situation.

Cummings also pronounces ‘Grimwade’ the same way I wrote it further up in the review. No one seems to note that Davison loses his waistcoat in the second episode or in the third episode where Peri’s shirt goes from open to buttoned to opened again. As to where the Doctor put his glasses, watching, I spotted a pocket in his trousers and it’s not unusual for the Doctor to hide various things about his person. Fiona Cumming points out that she was an assistant floor manager on the ‘The Massacre Of St. Bartholomew’s Eve’ story with William Hartnell and worked her way up through the ranks and this was the last ‘Doctor Who’ story she directed. I looked up her career and she died in 2015.

Set designer Malcolm Thornton goes over what was involved then and now with the 5 minute ‘Design Of Sarn’. I didn’t see much difference in the ‘Alternative, Deleted And Extended Scenes spread over 15 minutes. The 8 minute Photo Gallery also didn’t show much behind the scenes.

Finally, the 12 minute ‘Remembering Anthony Ainley’ was given over to mostly a convention interview by him as cast comments were mostly he was a private person with a passion for sport. Oddly, they don’t seem to know his co-starring role in ITV’s ‘Spyder’s Web’ although maybe the BBC don’t look at the other channel.

Although I can understand the BBC putting both stories in a boxset because of the connecting factor of Kameleon, I do have to wonder if perhaps they had less faith in selling them separately. The real shining glory for both stories is the superb Anthony Ainley and his take on the Master but it would be a big boxset putting all his adventures together.