The Doctor (actor Jon Pertwee) and Jo Grant (actress Katy Manning) are asked to investigate armed ghosts at Auderly House, current residence of Sir Reginald Styles, although the man himself later denies he saw anything before going off to China to persuade them to join the peace talks going to be conduct there. In the grounds, an injured man is found and futuristic equipment of a disintegrator gun and a primitive portable time machine. The Doctor and Jo stay to see if the event happens again inside the house while UNIT men patrol the grounds. After a fruitless night, three guerrillas from the future arrive at dawn and initially think the Doctor is Styles and told they arrived a day early and keep them captive. When the Doctor has to reassure the Brigadier (actress Nicholas Courtney) over the phone that everything is OK, Jo frees herself from her bonds and threatens them with the time machine and gets transported into the future. There, she is convinced by the Controller (actor Aubrey Woods) that they are in pursuit of these ruthless guerrillas and gives them the necessary co-ordinates, unaware that he is under orders from the Daleks.

When the Orgrons attack the house, the guerrillas flee and the Doctor in pursuit to their leave point, bumps into a waiting Dalek. Well, nearly. He evades the Dalek and discovering the guerrillas and escapes with them two hundred years into the future. Hearing that Jo had been captured, he leaves them to go and rescue her and gets captured by the Orgrons and tortured, most of which is off-screen. He is released from his confinement long enough for a guerrilla insider to ask who he belongs to before the Controller arrives and whisks him off to Jo’s room for a meal and tries to persuade him that he actually saved lives.

The head of the guerrillas hears that the Daleks fear the Doctor and orders his team to go and rescue him. They succeed and want him and Jo to get back in time to assassinate Styles who their history books records as blowing up the peace conference, which in turn brings the Earth down the sticky path that led to the Daleks taking over. The Doctor isn’t convinced, especially when they realise one of the guerrilla number, Shura (actor Jimmy Winston), is still in the past and who might actually be the cause. Returned to the past, the Doctor and Jo meet UNIT and have to convince Styles to get the house to be cleared as the Daleks and Ogrons arrive and attack. For the ending, you’ll have to watch the DVD.

In many respects, there are similarities to ‘The Terminator’ plot, except this one came first and there have been others like it earlier, like in ‘The Outer Limits’ and ‘Timeslip’, years before. It’s also a demonstration of any future merely becomes a potential one by changing an event in the past. The future of this alternative Earth is bleak and with the possibility of Man’s extinction with so few population left and doubtful if the Daleks would leave anyone alive after they finished stripping the Earth. Considering the Doctor has been in the far future where Man has prospered, it must have been obvious that it mustn’t be allowed to happen and wasn’t the order of events that he knows.

Interestingly, the bridge portal that was the nexus for the guerrillas to travel between times looked very much like the bridge used in the Hartnell ‘The Dalek Invasion Of Earth’, although that was only a set in the earlier years.

It’s a shame that the Ogrons weren’t kept on as the Daleks army over the years but maybe they weren’t bright enough even for them.

The audio commentary is split between producer Barry Letts, script editor Terrance Dicks, vision mixer Mike Catherwood and actors Anna Barry and Jimmy Winston. Oddly, none of them realise that the reason the Daleks diction was bad as because both were new actors doing their voices. Nor for that matter, just how did the Doctor get the TARDIS console out of the blue box for the second time (for the record, the first time was in ‘Inferno’). My best time was with the commentary between Barry Letts and Mike Catherwood over episode three where the latter discusses his vision mixing job. Letts was a bit unsure at first but then got into the conversation and it presented a full insight into the job. Until now, I always thought the count into a tape clip, you see it shown a lot when seeing behind the scenes even today, was just to coming on screen when in fact it is the time for the ten feet lead in tape to go through. The difference between amateur and professional actors is that latter don’t just rehearse the dialogue but the precise movements so they can do them repeatedly when recording.

The extras is an interesting bag, ranging from Peter Purves on ‘Blue Peter’ confirming his ‘Doctor Who’ past to behind the scenes of the story. Oddly, for me, the best part was again Mike Catherwood discussing his job with Barry Letts and how things have somewhat changed today and in contrast, the equipment is now cheap and its personal cost more these days. Although things are different today, the ability of the visual mixer or as Catherwood describes the job as a ‘live film editor’ is still a valuable job. I hope someone is paying attention to this because having a practical demonstration, even using new equipment to this job and the decision as to which cut of the scene is required would make for a fascinating insight.

The second DVD and what makes this a special edition is replacing the effects and Dalek voices with up-to-date versions. The significant difference with this version is having Nicholas Briggs doing the Dalek voices, background showing the future London towers, the time transporters looking like a golden version of the Terminator technique without the ground melting and ray guns that don’t dissolve but explode the body. In many respects, this is probably the same kind of thing that the Americans did with the original ‘Star Trek’, even if I haven’t seen that yet. I’m of mixed opinion over this as much of it so much window dressing and depends on whether you want to see the original or one that is a little more polished.

There are two extras showing what was done to create the special edition. If there was any surprise, it was there was no modification to make the Ogron menace when the Doctor killed him which seemed like a missed opportunity to amend.

Probably more important is ‘The UNIT Family – Part Two’ which examines from the cast point of view all their significant episodes during the opening seasons of Jon Pertwee’s tenure up to Katy Manning’s departure. I’m still puzzling where ‘Part One’ is and it’s a shame there isn’t a reference as to which DVD story it’s on. This is invariably a problem of the scattershot release across the regenerations.

The exploration of the UNIT history line forgets the even more convoluted Dalek history where the final destruction of them was actually done in the Hartnell regeneration. My own solution is that the BBC version of the Time Lord’s time-line is only a representation and those pesky humans have made the odd error by quoting the wrong years.

There is also an interesting piece about how young memories don’t remember as well as their older adult version. Even someone with my kind of recall doesn’t remember everything also something like ‘Fury From The Deep’, for instance. I can tell you about the TARDIS crash-diving into the sea, the thumping in the oil pipes, the two human hosts still scarily breathing out carbon dioxide and the leader host stepping out of foam to invite the Doctor to join them, not to mention it was Victoria’s screams that got the seaweed. It might be a fragmented memory but it’s probably more than many people can remember of the story, even if they saw it.

All in all, an interesting DVD and if you haven’t bought it yet, then certainly time to add to your collection and wonder if Terrance Dicks is actually a Sontaran. 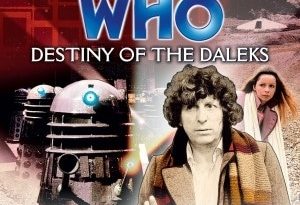 Doctor Who: Destiny Of The Daleks by Terry Nation (CD review). 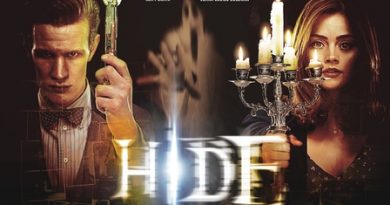 Doctor Who… with bells and rings on.

Doctor Who: The Mutants by Bob Baker and Dave Martin (DVD review).