‘Denver Moon: The Minds Of Mars is an SF adventure story set on the red planet but, due to a genetic condition our heroine, Denver Moon, can only see in black and white. Blood and gore are not so nasty that way and, in her career as a private investigator, she’s seen plenty. Denver is the top P.I. on Mars, ably assisted by an AI called Smith, whose concealed in her gun but can communicate via a chip in her head and contains her late grandfather’s memories. 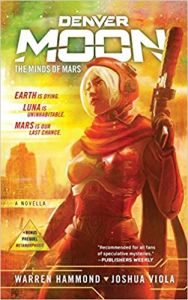 A fit woman with bleached blue hair and Japanese features, Denver is the granddaughter of Tatsuo Moon, one of the original hundred settlers on Mars and co-founder of Mars City, a maze of tunnels more than fourteen levels deep. Tatsuo is gone, dead twenty years, but his old partner, Cole Hennessy, is still around and heads the Church of Mars.

Mars has a problem: Red Fever. It infects hundreds of people and, depending on their luck, turns them ‘bad-tempered, blind with rage or unstoppably murderous’. As the book opens, Denver goes to see Yazou and Aiwa Chen, also original settlers and like an aunt and uncle to her. Alas, they have succumbed to the fever. While Denver struggles for her life, a hologram of her late Grandad pops up with a message: ‘Mars is in great Danger. You must find me.’

So chapter one launches the story with a deadly plague and a mystery. Great hook! Tatsuo is supposed to be dead so Denver goes to speak to the last person to see him alive: Cole Hennessy. Mars City has three-quarters of a million inhabitants and a third of them swear loyalty to the church which promises that by stern discipline and rigid mental practice Red Fever can be avoided.

The story soon turns into a rip-roaring adventure with Denver on the run from assorted minions of evil out to kill her as she tries to dig up twenty year-old secrets. The background, Mars City, is well realised and the story has all the paraphernalia of good Science Fiction from AIs and sexbots to spaceships and satellites. There’s even a mad scientist called Doctor Werner.

This solid yarn has three-dimensional characters, great plot twists and a terrific conclusion. The book also features a short story prequel ‘Denver Moon: Metamorphosis’, also available as a graphic novel, in which she investigates the dismemberment of ‘botsies’ (sex androids) in the lower levels of Mars City. It features some of the characters who figure in the main adventure. Add to that a twenty page ‘sneak peek’ at ‘Denver Moon: Book Two’ and you get a lot for your money. I was also sent two ‘Denver Moon’ comic adaptations of the short story but reviewing them seems redundant. There’s even a soundtrack. Clearly, ‘Denver Moon’ is going to be a multi-media phenomenon so watch out for the stage play, film, musical and opera.

As for the book, hurrah! In truth, it harks back to the old Ace Double paperbacks of the 50s, novelettes with fast-moving stories that you read for a bit of good clean fun. I enjoyed it hugely and unless you are all literary and pretentious, you will, too.