I don’t always mention the art that graces the covers of ‘The Magazine Of Fantasy & Science Fiction’, so I’ll start this review by saying that I love the picture on the front of the March/April issue, beautifully painted by Cory and Catska Ench. It introduces us to the four main characters in the opening story, Charlotte Ashley’s fantasy novelette ‘The Satyr Of Brandenburg’. This is another of Ashley’s stories about the magical swordswoman who goes by the nickname of ‘La Héron’. On this occasion, she has entered a duelling competition with a huge purse for the winner, only to realise early on that one of the other three duellists is a cheat. Can she overcome his magical powers and win the money she so desperately needs? I remember being introduced to La Héron in a story in MoF&SF exactly three years ago. I loved the character for her swashbuckling sense of style and fun. This second outing strikes exactly the same tone, providing a wonderful start to this issue. 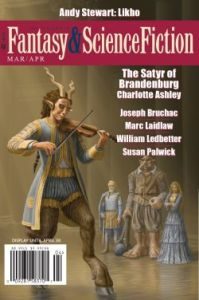 Next up is a Chinese SF novelette in translation. Chi Hui is the former editor of ‘Science Fiction World’, China’s leading SF magazine, so she should know what she’s doing. Her story, ‘Deep Sea Fish’, was originally published in Chinese in 2011 and is translated into English for the first time by Brian Bies. We are in 2065 and a team of nine archaeologists, led by a man called Yanse, have travelled to Saturn’s largest moon, Titan, to survey some prehistoric ruins of ice sculptures to see if they are natural or were made by intelligent aliens as some have suggested. They haven’t got much time, as the ruins are situated in a region of the moon that is shortly to undergo terraforming, to improve the colonists’ lives. Unfortunately, that process will melt the ice sculptures. Can they prove the sculptures are of alien origin and, if so, will this be enough to stop the terraforming, as some of the younger colonists seem to want? I enjoyed this story hugely. The setting is portrayed with great attention to detail, the plot is fascinating and the main characters are engaging, so that you want to see what happens to them next. I haven’t read much Chinese SF to date but will keep an eye out for more after this.

The first short story in this issue is ‘The Next To The Last Of The Mohegans’ by Joseph Bruchac. This is a contemporary fantasy story about two Native Americans, sensible Billy and his troublesome friend, Arlin. When Billy gets an urgent call one afternoon, even he is surprised by the difficulties into which Arlin has got himself after deciding to investigate the local folklore about ‘the Little People’. This is a whimsical little piece that’s full of a gentle, dry humour.

‘After The Wolf’ is a short poem by Jeff Crandall which retells Little Red Riding Hood from the different perspectives of four of the characters. I thought it was well executed and intriguing.

The longest piece in this issue, Andy Stewart’s dark fantasy novella ‘Likho’, follows. It is a contemporary piece set in the Ukrainian town of Pripyat, close to the site of the 1986 Chernobyl nuclear power plant disaster. Thirty years on, Sonya feels drawn to the ghost town by the strange stories told of the ‘Seven Orphans Of Pripyat’, who were accidentally left behind in their orphanage when everyone else was evacuated, yet who mysteriously found themselves enclosed in a protective bubble which saved them from radiation poisoning. A mural depicting the orphans has been painted on one wall within the orphanage and Sonya has come to examine it for herself. She wants to find out whether the fact that photographs of the mural, taken years apart, show subtle differences is due to repainting by local graffiti artists or has a more supernatural origin. At the same time, Sonya, an orphan herself, also wants to understand why she feels such an affinity for the mural and its subjects. Can a mere painting answer all these questions? I was fascinated by this story, which explores the edges of SF and realistic fantasy with great assurance. Sonya is a strong and intriguing main character, the setting is brilliantly depicted and the complex plot keeps you reading all the way through.

William Ledbetter’s SF short story ‘The Beast From Below’ is a dryly humorous transplantation of monster movies like ‘Godzilla’ to the natural fauna of the American mid-West, which I found original and highly entertaining.

The intriguingly titled ‘Hideous Flowerpots’ by Susan Palwick is a contemporary fantasy novelette which sees neurotic over-achieving art gallery owner Lauren attending, much against her better instincts, a self-help group of women so she can overcome her fear of failure. Lauren hates such groups and the people who go to them on principle, yet finds herself drawn there repeatedly, seemingly by the charisma of the group’s leader, Elena. Is it all bunkum or does Elena really have some magical way to help Lauren and the others to confront their fears? I was expecting not to enjoy this story. Lauren initially comes over as a total bitch, while most of the members of Elena’s self-help group seem like pathetic losers. As the story unfolds, however, the repeated use of irony and dry humour works to humanise all the characters, unveiling them as complex people just trying to make sense of their lives. I found the piece enjoyable and uplifting in equal measure.

The shortest story in this issue is Marc Laidlaw’s ‘A Swim And A Crawl’, which sees an unnamed male swimmer jump into the sea at sunset, perhaps to drown himself and perhaps not. What follows is not what he or we expect. The piece seems to me a bold experiment and, although I enjoyed Laidlaw’s style and found the ending of the story memorable, I’m not sure it’s entirely successful.

This is followed by Mary Soon Lee’s SF poem ‘Diaspora’, which uses alliteration to great effect.

In one of his irregular ‘Plumage From Pegasus’ columns, Paul Di Filippo spins an amusing SF tale about the importance of conflict to creativity.

Following the sad death of co-author Paul Doherty a few months ago, the magazine’s ‘Science’ column returns with a guest author. Jerry Oltion provides an excellent introduction to the wonders of naked-eye astronomy for those who have never had the pleasure of looking up at the night sky.

David J. Skal uses his ‘Films’ column to report back on his experience as a juror at the 2017 Sitges Film Festival in Spain. He provides thoughtful reviews of several films that I would probably never have heard of otherwise, as well as one or two more familiar titles.

The final novelette in this issue also represents author Ted Rabinowitz’s debut in MoF&SF. ‘A Dog Of Wu’ is a post-apocalyptic SF story which follows Tomas, a fixer for the powerful Wu family. In this rigidly demarcated future society where, for example, all miners are called Gibson and come from the same genetic stock, most of the problems he fixes revolve around genetic divergence amongst the family’s many servant classes. Where such divergence becomes too high, Tomas is sent out to kill the offending person. After one such job, Tomas is given the rare honour of an audience with the leader of the Wu family. She praises his work, then sends him on a new mission to find and deal with the source of some audio recordings that some of the servants have been found listening to. These SF audio plays from 1950s American public radio include the sound of a rocket engine, a noise which is forbidden by the family’s rules because of its negative association with the apocalyptic events from which their current society arose. Tomas attacks his new task with customary efficiency but it involves mixing with people from outside the Wu family estates and even, horror of horrors, so-called ‘Feral’ humans, who do not follow ‘the Way’ as Tomas does. The more he sees of these people, the more confused he gets. When some of them refuse to cooperate, he finds himself having to compromise to achieve his aims. Can he fulfil his mission without losing himself completely? This is an exceptionally strong debut story. The world-building is impressive from the first paragraph and Tomas is an excellent protagonist whose character arc across the story is dramatic and yet convincing. I hope that Rabinowitz is planning to write more stories set in this world.

Next up is ‘The Harmonic Resonance Of Ejiro Anaborhi’, This SF short story from Nigerian author Wole Talabi is set in the city where he grew up and shows us what happens when young SF fan Ejiro encounters an alien artefact for herself while taking chopped tomatoes over to her aunty’s house for grinding. I enjoyed spending time in Ejiro’s company and loved the juxtaposition of the everyday with the extraordinary in this story. However, it did feel to me as if every important outcome in the piece was caused by the alien artefact rather than by the human characters who consequently had little genuine agency.

The final short story in this issue comes from recent World Fantasy Award winner G.V. Anderson. ‘Down Where Sound Comes Blunt’ is an SF take on the selkie legend which has a real sting in its tail. I enjoyed the setting, plot and main character but it is the dramatic and unexpected twist ending that elevates this story to a different level.

As ever, the magazine’s final page is given over to the ‘Curiosities’ column, which this time discusses ‘The Cloud-Dream Of The Nine’, a 20th century English translation of a 17th century Korean fantasy, itself based on events set in 9th century China. Based on the article’s brief summary, I’d love to read the book!

So there goes another issue of MoF&SF and I’m pleased to say that it’s an excellent one. Over half of the stories in the magazine got full or nearly full marks from me, while there were only two where I had any serious reservations. Editor C.C. Finlay continues to do a splendid job of finding wonderful new genre fiction for us all to enjoy every couple of months. Long may it continue.