We only have one blu-ray disk advance copy, although the bumf insists there are two and the rest of the extras are on that one but that appears to be incorrect and I think the great river site is confusing as well this with the DVD. There’s an 80 page booklet with the limited edition but wasn’t available to review. The director is Guillermo del Toro which should get your attention.

American Edith Cushing (actress Mia Wasikowska) is an ambitious Victorian author working on a ghost story and explains to her father, Carter Cushing (actor Jim Beaver), that if she is to be taken seriously then she will need to type than submit a hand-written story. Into this mix is Baronet Thomas Sharpe (actor Tom Hiddleston) who is trying to sell his concept of mining coal with his new machine. Totally outrageous, even to her father but he could see it removing manual labour. Thomas’s sister, Lucille (actress Jessica Chastain) is also with him and definitely off-putting. 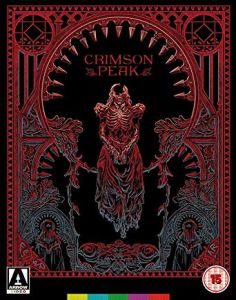 Thomas’s budget is running out and Cushing has had him investigated after he realises that Edith is falling for her. He buys Thomas off on the provision that he breaks up with Edith permanently. To do that, he ridicules her story publicly.

Discretely, someone proves Cushing’s head and a china basin are not fragile and kills him. He also sends Edith a letter explaining all, well apart from the murder, which gets her chasing after him, just before he leaves to return to England. With her father dead, Thomas marries Edith and takes her to his English mansion, Allerdale Hall. As glamourous as it looks, Thomas points out how its falling apart and even accepts a dog stray nearby that Edith wants to keep. His sister, Lucille, is still rather frosty with her. Both have ambitions over Edith’s money. One last detail: the Hall is haunted. ‘Crimson Peak’ is the nickname of the Hall because of the nature of the red soil it rests on seeping to the surface.

Back in New York, private detective Holly (actor Burn Gorman) confides to the investigating Dr. Alan McMichael (actor Charlie Hunnam) that Thomas is already married which is why Cushing had or tried to send him packing.

Lucille is determined to poison Edith and Thomas is changing his mind and stopping it but is being drawn in different directions. However, when Edith realises and sees the connection between the siblings, she suffers a fall. Fortunately, McMichael arrives and helps her and offers her an escape. Alas, well, you’ll have to watch to see what happens next.

There are some extras on the primary disk. Principally the audio commentary with Guillermo del Toro with 14 extras. I decided to watch the extras first so as to make sense of the nuisances first and put things in context.

The 50 minute ‘The House Is Alive: Constructing Crimson Peak’ documentary with cast and crew is quite illuminating. More so as set dresser Alex Kutschera shows the detailed model he and Guillermo del Toro used to work out the house.

The 8½ minute interview with Guillermo del Toro is in Spanish but has English sub-titles. As with all these extras, some of the same ground is covered but there are different details added. Del Toro sees his film as a gothic romance rather than a horror film with an emphasis on characters than scares. He also emphasises paying attention to the motifs in the background. As a film-watcher, my focus tends to be on the action and/or actors in the film and I’m not sure how much of that I mentally absorb.

About 25 minutes is spent with the ‘Allerdale Hall: Featurettes’ of which there are four. These are at different points in the sets, seeing some behind-the-scenes aspect of film with comments from actors and del Toro. The biggest emphasis is that the entire Hall was built as a practical set, including the roof.

The 6 minutes of ‘A Primer On Gothic Romance’ has them discussing what the difference is from horror. ‘The Light And Dark Of Crimson Peak’ at 8 minutes again focuses on the texture of Allerdale.

The 9 minute ‘Hand Tailored Gothic’ looks at the costumes and how they were contrasted. It also points out that the Sharpe siblings have clothes 10 years out-of-date simply because they can’t afford anything new. The problem with period pieces is that you accept what you see as the norm than question historical age. There is also an interesting question as to how Tom can afford to build his prototypes and travel and not have any spare change?

‘A Living Thing’ at 12 minutes goes back to Allerdale again and a look at the detailed model before it was built full-scale 60ft high on a sound stage. It did make me wonder who now owns the model. More so, in the 8 minute ‘Beware Of Crimson Peak’, Tom Hiddleston takes us on a guided tour of the full-size version before it was taken down. He says in terms of actual filming, it took 3 weeks.

‘Crime Phantoms’ at 7 minutes explores the ghosts. This also appear to be the only place where some serious CGI effects are used on extended facial expressions and other things that couldn’t be done practically. The indomitable Doug Jones, as always, plays the various ghosts.

There are two pieces by horror historians Kim Newman (18 minutes) and Kate Ellinger (23 minutes). As they both cover the same subject of the history of gothic romance and how it pertains to ‘Crimson Peak’ from different angles, there are some similarities. I would recommend keeping a notepad by you while watching because there are bound to be some films mentioned with clips that you might want to dig up.

There are 5 deleted scenes spread over five minutes. There is more emphasis on the ghost story in ‘The Park’ than in the film. In fact, there is a lot of emphasis here which would have changed the nature of the film.

The Image Gallery has 3 minutes of production stills and nearly that long again, ‘Behind The Scenes’, principally following del Toro on the set.

So, now to the audio commentary with Guillermo del Toro who explores the themes of the film. He reminds you to pay attention to the moths and butterfly motifs that will pop up all the time, growing in the picnic scene. The colours are different for American and England. The use of red is reserved for only particular things. He then thanks the various production teams. The second part of the film is orientated towards being a heighted ghost story but works to the depth you look into it. Del Toro loves and appreciates Hitchcock. He also explains how he notes to the cast what they need to perform their parts.

Looking at the pace of the audio commentary, it becomes obvious that de Toro has prepared his conversation than ab lib as happens usually. Nothing wrong with that. In fact, this can often be a better way as you don’t any pregnant pauses waiting for them to say something. I also realise the depth of the credits now a he enforces the moths and butterfly theme there.

As always with del Toro films, there is a luxurious richness endowed in his films and this one is no exception. If ever there was a reason to keep a love of extras and a need for DVDs and Blu-rays, then this should re-enforce the need for such physical versions.4 Don’t drink the tea. No matter how Lucille will convince you. Hatchet jobs not accepted. 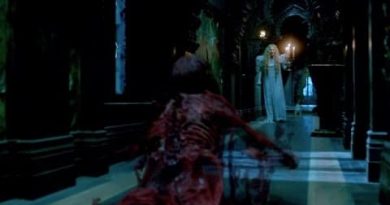