The daughter of a wealthy man finds love with a handsome baronet and has little idea where this will lead her. Guillamo del Toro gives us a creepy ghost story with a colour palette doused in greens, drenched in saturated reds and set in the world of 19th century literary fiction. It is beautiful to watch until it jumps off the rails and goes over the top. Numerous experiments in visual and writing style are obvious throughout the film. The IMDB calls the resulting film a Drama/Fantasy/Horror/Mystery/Romance/Thriller. That about covers it.

I do not happen to care for Guillermo del Toro’s films based on comicbooks. But since his film ‘Cronos’, his horror films have never been less than visually fascinating and generally fairly creepy tales. Often, we find the supernatural in his films, but it is not the point of the story. The viewer comes to the film for the weird elements, but it is the good story about people that captures the viewer. Del Toro is probably the best horror director in North America, turning out fresh new ideas in every horror film. Del Toro directs, but he also co-authored the story with Matthew Robbins, who has worked on scripts going as far back as ‘Sugarland Express’ (1974), ‘Close Encounters Of The Third Kind’ (1977) and ‘Dragonslayer’ (1981). Here, the writers tell a romance story with echoes of Jane Austen, Edgar Allan Poe, Henry James and Emily Bronte. Edith Cushing (played by Mia Wasikowska) is a sort of early 20th century proto-feminist who ignores the interest of a long-time male friend and has a severe distaste for Baronet Thomas Sharpe (Tom Hiddleston), a business associate of her father whom she has never actually met. When she does finally meet him, she finds her aversion is totally unrequited. The baronet has been totally charmed by Edith and who is soon is charmed by Thomas. Edith’s father has very low regard for Thomas and attempts to buy him off to no avail. Thomas’s sister Lucille (Jessica Chastain) is equally unhappy with the match and lets her feelings be known, though she does come to accept the couple. Eventually, the couple marry, leave Buffalo and go with Lucille to live alone together in Allerdale Hall, the Sharpe family’s dank mansion in the lake country of England. Edith has been told previously by her mother’s ghost – yes, she has been visited years ago by her mother’s ghost – to beware Crimson Peak but her mother had made no mention of Allerdale Hall. Edith is shocked to learn that Allerdale Hall rests on a hill known as Crimson Peak. What is crimson about the hill? It is made mostly of bright red clay. When the clay mixes with groundwater the result is what looks like blood coming oozing from the wounded hill.

There is a lot that is blood red in this film. Much of it comes from the veins of the characters. It is clear that bright red was some decorator’s favourite colour in Allerdale. We see metric tons of things bright red around Allerdale Hall. There are twelve foot diameter tubs of blood-red mud in the lower levels. If you do not watch the garden, the earth under it will bleed gallons of blood-mud from the turned earth. This would be a charming place for a picnic. You just know that some time soon, the ground will not be the only source of blood-red. Some time before, at Allerdale, the second-favourite decorating colour must be green. The place must look really weird through cellophane 3D glasses.

Besides playing with the colour, del Toro does some remarkable things with sound. Invisible phantoms seem to fly overhead. At one point, a dog is heard to bark, but alternating barks come from the left and the right of the theatre. I cannot promise that these effects will be heard at every theatre, but they were quite impressive where I saw the film.

I have one major complaint about the film. Once people get into real trouble they seem to be able to survive injuries that would have reduced Jason Bourne to smeary goo. It is just my opinion but I think that once someone in the film is wounded to a degree that is mortal, they should have the decency to say ‘uhhhh!’, lie down and not move any more under their own power. We have about 7.3 billion living people in the world and once someone is sufficiently killed they should move over to the ranks of the dead. Del Toro does some interesting things with this film, but they do not all work. I give ‘Crimson Peak’ a +1 on the -4 to +4 scale or 6/10. 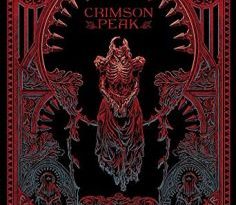