There are a few things that you become aware of when you start reading the introduction to ‘Comics And Adaptation’. The first is half the book is devoted to how other fiction is adapted into the comicbook format and most of the examples come from France or Spain so don’t expect the usual suspects. It is also illustrated so you can see the examples of what they are referring to which is always a good sign. The samples from the ‘El Cid’ Spanish comicbook should pique your interest purely from the fine line artwork. As the various writers in this book are from various universities, expect a lot of footnotes at the end of each chapter. I know this is something that is done in university thesis but it can be too habit forming and not helpful to the piece or to the reader who would probably prefer a solid read. Of course, the assumption is that only academics read these books but then why preclude a larger audience when you want to sell books? By that, you either ignore the footnotes and read at the end or just ignore them which isn’t helped when they also carry information which defeats their object. I think I would be inclined to call these footnotes endnotes simply because the publishers and, I don’t mean just this one, don’t understand their word processors enough to actually put them on the pages they are referring to. Sorry for the little rant. 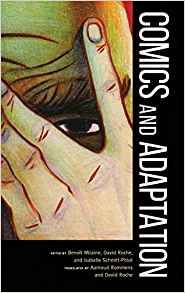 Thomas Faye explains the main reason for adaptation is to find a different audience from the original source. I agree with him to a degree. I mean, how many of you, when young, read the American comicbook ‘Classics Illustrated’? Were you doing that for a quick grasp of the plot or just not bothered to read the novels or did you seek them out afterwards or just read them because they are there on a rainy afternoon at school?

I should point out that not all of the samples are in a foreign language. Nicholas Labarre looks at Ray Bradbury’s short story, ‘There Will Come Soft Rains’, adapted by writer Al Fieldstein and artist Wallace Wood for EC Comics. He also points out the various places it’s been reprinted since so you should be able to get a copy. I read it as part of the ‘Woodwork: Wallace Wood’ review I did a couple years ago now. It’s hardly surprising the text was carried over to the art as EC Comics liked to do captions and the art was more illustrating to go with it.

The second half of the book focuses on adapting comicbooks to film. Of the six subjects chosen, only one is foreign language. The examination of Marvel’s adaptation is more what we would normally expect. Oddly, with the exception of ‘Watchmen’, there is little comparison to DC Comics’ forays.

The biggest surprise was seeing a piece by Jean-Paul Gabrilliet on Robert Crumb’s ‘Fritz The Cat’ and how the Underground creator dismisses the Ralph Bakshi animated version as not to keeping to the spirit of the source. The American Underground comics culture never really got made in the UK so I ended up learning a lot on this particular subject here.

Although the choices are limited, there are some comparisons made to cartoons and blending them with live-action. It was only when I thought about it that I wondered with the Tex Avery reference why there was no mention of the 1994 film ‘The Mask’, which totally depended on it.

In many respects, I started this book thinking it might have been a poor choice to review but as I read and learnt rapidly from it, my opinion has changed somewhat. There’s a lot of useful information to learn here and the various writers do actually know their stuff. This is the hardback version and, although its pricey, I suspect a softcover version will be available at some time in the future.