‘Tumult’ is a graphic novel written by John Harris Dunning, drawn by Michael Kennedy and brought to you by SelfMadeHero, who do many interesting books. 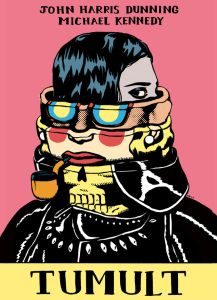 It’s the story of Adam Whistler, a director of commercials and music videos, who hopes to make it to the big time: feature films! Meanwhile, he lives a reasonably contented life with Sarah, his partner of ten years. Contented, but perhaps a little bored.

On a beach holiday, he jumps off a cliff into the water and hurts his leg. Laid up, he falls victim to the charms of a local girl who comes to visit and that ends it with Sarah. At a party back in London, he meets an enchanting lady called Morgan and falls madly in love with her. But Morgan has a dark secret, multiple personality disorder, and may even be an assassin. However, his infatuation with her means he can’t let her go, so the plot thickens.

Adam’s okay as a character but, as so often in fiction, it’s the secondaries who bring the book to life. I enjoyed his friend Marek, a film critic. He shares his analyses of movies for men like ‘Predator’, ‘Die Hard’, ‘Terminator’, ‘Rocky’ and ‘First Blood’, explaining why the stories grip us and what makes them classics. There’s a man called Dave, ginger-bearded, fat-faced and creepy who follows Morgan around and seems to know something about her background.

I can’t say much more without giving away the plot. This is a psychological thriller and slightly reminded me of Alan Moore’s ‘V For Vendetta’. The script was often clever and the story rattled along at a good pace so I read it on a Sunday afternoon. The art by Michael Kennedy tells the story well in old-fashioned grids of five or six panels to a page. There’s not a lot of movement in the story, mostly talking heads, so it can’t have been an easy one to liven up. He does okay. His style is a bit too much like INJ Culbard for me to love but it gave a smooth read and is easy on the eye. No complaints.

‘Tumult’ is an interesting read that may resonate with young urban professionals who live the hedonistic lifestyle of the main characters and have similar value systems. I liked it well enough and am glad to see SelfMadeHero stretching the boundaries of the graphic novel.