Granted this was in 1966 and ‘Doctor Who’ hadn’t regenerated yet, but it has happened back in the 1940s in the film series, ‘The Gay Falcon’, when actor George Sanders tired of the role, allowed his character to be killed off and let his real brother, actor Tom Conway, step in as brother and the series continued. It isn’t as though there wasn’t a precedent. 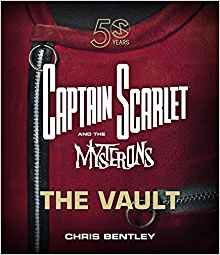 Seeing the original ‘The Mysterons’ script cover here, it has Sylvia’s name first but Bentley tends to deter from who came up with most of the ideas. Watching the blu-ray edition of the original TV series at the same time, ended up with me making some odd observations. It’s only inferred towards the end of the book that the Andersons were involved with the ‘Thunderbirds Six’. However, considering how many panels were shown of the credits, there is scarcely any mention of the fact that Reg Hill was the series producer.

Seeing the Century 21 Organisation structure, it does seem odd the AP Films Ltd took so long to change its name to Century 21.

I should point out that between each episode of the series, there is a look behind the scenes at everything from people to props. The episode synopsis is really very brief, mostly because it has been done elsewhere, but carries a lot of useful information. It almost looks like Bentley is agreeing with an article I wrote on-line a few years ago where I point out that Captain Black was controlled but not mysterionised in the episode ‘Manhunt’.

The discrepancies of why Captain Scarlet not being able to recognise other Mysteron agents about him less so. I’m not entirely convinced that the sedated Captain Scarlet had enough electric treatment in ‘Operation Time’, to kill him. Thinking constructively, just how much electricity does it take to kill a Mysteron agent? Watching the series, it’s clear that a sustained high voltage is needed or any mysteronised person would die touching an exposed electric socket.

With ‘Spectrum Strikes Back’ and Bentley’s comment that why would Scarlet be seen with his clothes on when they weren’t mysteronised when photographed. I suspect that it has more to do with electrified field he emits than what he wears and that would affect his clothes. There is no comment that the Mysteron detecting camera looks like the front of a car.

The real problem with the Mysteron electric gun was the impracticability of its size. You would think missiles with an electric charge would be used against mysteronised vehicles except the Mysterons never resurrected them a second time. You would also think that the fact that Captain Scarlet coming out as a blank image in a normal camera in ‘Flight 104’ would be grounds for using a cheaper instamatic camera for spotting mysteronised people. Contrary to his piece, the camera did appear more than once as it also appeared in ‘The Heart Of New York’.

Seeing the reference to the time that Captain Scarlet appeared on ITV’s ‘The Golden Shot’ must make me one of the few remaining people who saw this live on TV. I suspect having host Bob Monkhouse as one of Zero-X crew voices in the film of ‘Thunderbirds Are Go’ as well as a genre fan made all of that possible.

No reference is given to what happened to the second mysteronised model in the episode ‘Model Spy’. One can only presume she dematerialised when Captain Black and the other model in the car vanished.

What makes this book a useful guide is seeing all the books and merchandise related to the series from 1967 and 1993 so if you are looking to be a completest or looking for the odd item, you will see both its box and contents. Thinking back to 1967 time period, I don’t think my town’s toy shops had a fraction of the items beyond the Dinky cars or, if they did, they sold out pretty quickly. I didn’t realise that there were so many Century 21 singles of ‘Captain Scarlet’ adventures although at least I have the three album-sized ones.

Reading about each episode, I was taken back by how often models from ‘Thunderbirds’ and even ‘Stingray’ were recycled and that included interiors. For those of you who’ve compared the scale of the ‘Thunderbirds’ marionettes to that of ‘Captain Scarlet’ will be aware, they are somewhat different so I’m amazed how some of their chairs were so easily used. I recognised some of the musical cues coming from ‘Thunderbirds’ but the recycling also went back as far as ‘Stingray’ and ‘Supercar’ occasionally.

I was taken back by the reference to Enrique Badia Romero having drawn an Angels story for one of the Lady Penelope Annuals. I didn’t spot or assumed it was just one of the Spanish artists but, on a quick scan through the annuals, it looks like he drew several Penelope stories in all three books as well. Modesty Blaise fans take note if you want to seek out all of Romero’s work.

Something else I wasn’t aware of was the episode ‘The Launching’ had to be re-filmed when they discovered there was actually a ‘Chicago Tribune’ newspaper and they had to avoid inadvertent trademark infringement. Thinking about it, I think this might have been the first time that happened although you would think it might have been easier to phone the Tribune and see if they could get permission. These days, there is usually a legal team for any TV series of film checking for such name problems.

The final pages look at the ‘New Captain Scarlet’ series. It’s a shame really we only see a few pages of this as there really hasn’t been much in the way of examination of the computer animated series of either ‘Captain Scarlet’ or ‘Thunderbirds’ come to that.

I think would have liked to have seen how well ‘Captain Scarlet’ was received abroad and a look at foreign merchandise as well but that might have added too many more pages to the book.

One last thought to end on. As the 1967 ‘Captain Scarlet’ was being completed, they were already prepping to start ‘Joe 90’ with no thought as to give the former a second season. Granted ’Scarlet’ didn’t get a national release in one go but considering the promotion it was getting via merchandise that almost feels self-defeating.

As it stands, ‘Captain Scarlet And The Mysterons: The Vault’ does give you a lot of insight into the series and a lot of photographs in front of and behind the scenes that you might not have seen before.