If you think lasers are only used in burglar alarms, then Todd Neff’s book, ‘The Laser That’s Changing The World’ will put you right. As the sub-title, ‘The Amazing Stories Behind Lidar From 3D Mapping To Self-Driving Cars’, we have quickly become accustomed to having lasers as part of our everyday life. If you don’t believe that, then think of how your mobile phone keeps track of where you are, navigation in your car and even the design of computer landscapes. The map of the world has to be mapped to show where you are. 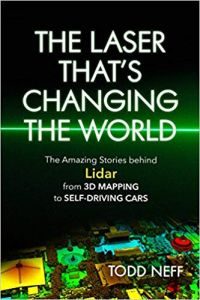 I have to admit I was confused by what ‘Lidar’ was as I thought initially it was the name of a company, which indeed it was originally. However, the term ‘lidar’ is the light equivalent of sonar and radar and used to map the world more accurately than they can do, using colour gradients to map depth and height. If you think this is a modern invention, Neff points out that one of our own, Edward Hutchinson ‘Hutchie’ Synge came up with it back in 1928. Although not a physicist, he did correspond with Albert Einstein no less who thought his ideas on lasers were viable.

Unfortunately, Hutchie died young and it took a couple decades before his work was carried on and in detecting weather conditions. When the US Navy got interested in using laser light for mapping and measuring underwater then things started to take off. Probably the biggest accomplishment was bouncing a laser off a reflector left on the Moon by Apollo 11 that the laser truly landed for measuring distance.

If you thought all lasers used ruby light, the change to neodymium-yttrium-aluminium-garnet (Nd:YAG for short) which uses a green light was more accurate.

What is impressive is seeing the money invested, seen as a small budget if $91 million in NASA terms, and yet used in relatively cheap low-flying planes and ultimately saving many companies money. The best example is the mapping pointed out which trees in the USA were hazardous to electricity lines and removing them also prevented a lot of forest fires. Don’t think the use of lasers and lidars is an expensive luxury, it is actually being used to save a lot of money as this book reveals.

I love some of the acronyms associated with the various machines. SLICER means Scanning Lidar Imager Of Canopies by Echo Recovery. Although another, COREL meaning Coherent Optical Radar Amplifier is seen by its inventors as a name lacking imagination.

Something that was interesting was coming across President Ronald Reagan’s SDI or ‘Star Wars’ programme and his displaying the imaging system of lidar to Gorbachev. The Russian leader realised they couldn’t even reach the initial stage of creating a similar system. Although we all know that Reagan’s threat of laser zapping enemy missiles out of the sky was more a pipe-dream, I hadn’t realised that lidar was the means of targeting rather than blasting. No wonder Gorbachev was worried because of its accuracy.

As the sub-title says, there is a look at self-driving cars and how lidar mapping has improved navigating. In some respects, it’s been a slow process, yet it’s been less than a couple decades of work. I did wonder why there isn’t a combined satellite link for static buildings and streets so the software could focus more on more mobile things like other transport and pedestrians.

Likewise, looking how accurate they want the lidar to work, I did wonder if the software screens remove dots and base on lines before they change direction. I do suspect that there is a symbiotic relationship with the higher resolution screens, especially on mobile phones has also aided lidar navigation.

Lidar has been used in many ways. Expensive films like the first ‘Spider-Man’ film mapped New York digitally for the webslinger’s journey over the streets. It’s also used on the Mars rovers to navigate the red planet’s terrain. If anything, lidar has become part of our lives without us even spotting it.

Todd Neff is a very good writer and a joy to read. I was surprised how effortless I found him to read which is always a good sign and I learnt a lot in a very short period of time. I do think the benefits of lidar will grow and if you want to educate yourself on the subject this book is just what you need.