After an introduction by renowned editor Ellen Datlow and a poem ‘O Terrible Bird’ by Sandra Kasturi, we get down to the meat of the book: the stories. 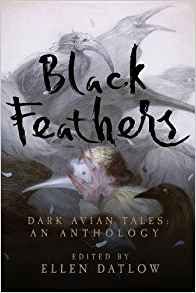 ‘The Obscure Bird’ by Nicholas Royle is about a man who starts turning nocturnal. His wife becomes worried. Then he ends up more owlish than Billy Bunter and she has real cause for concern. I jest but this is really quite disturbing and will surprise you.

‘The Mathematical Inevitability Of Corvids by Seanan McGuire’ concerns a modern family with a stepfather who is, as usual, not very nice, especially to his autistic stepdaughter who likes to count corvids, these are members of the crow family. ‘One for sorrow, two for joy’ is a refrain that British television viewers of a certain age will remember well from the TV programme ‘Magpie’. This is not only a great story but rolls along with such eloquent prose that I found it impossible to put down. Someone wanted to interrupt me and I declined. Like a poem, it has to be read in one go.

‘Something About Birds’ by Paul Tremblay works splendidly to build up an atmosphere of dread as a star-struck book reviewer meets his favourite author to discuss his limited but highly regarded literary output, especially his last short story about birds. The reviewer seems to be invited to join some sort of club. Very good but it didn’t end with a bang. This used to drive me nuts and I still don’t like it but I’m now aware that the authors of such tales are trying to do something…other.

‘Great Blue Heron’ is by Joyce Carol Oates, a big name famous literary writer. It’s the first thing of hers I’ve read and it was terrific. Claudia, not long widowed, lives in an isolated house by the lake. Her creepy brother-in-law is trying to take over her finances and other well-meaning sympathetic people are driving her nuts. She just wants to be left alone. Then she becomes fascinated by the great blue herons on the lake and starts to identify with them. This would work as a non-weird story about relating to other people but the fantastic element is well handled, too, and definitely gives it something extra.

‘The Orphan Bird’ by Alison Littlewood is a prime example of how everyday horrors can be much scarier than supernatural stuff like werewolves and vampires. Even Lovecraftian Old Gods can’t compare to the cruelty of children. Arnold is an outsider who lives in a cottage in the Lake District and paints birds, selling the pictures to illustrate books. Sometimes he ventures out among the tourists to prey on them. This is beautifully written and so disturbing I wish I hadn’t read it, which is probably the idea.

‘The Murmurations Of Vienna von Drome’ by Jeffrey Ford has the literary prose of the New Weird but it’s really more of an old-fashioned adventure story. A detective investigates a serial killer who always seems to strike after a snowfall and mutilates his victims in odd ways. I was previously unaware that starlings could be trained to speak but knew about murmurations. Here they form pictures! Good characters made this an enjoyable yarn.

‘Blyth’s Secret’ by Mike O’Driscoll is another one that mixes birds and child murder. Wil Blevins found the partially devoured body of his mother in the forest when he was nine years-old. Perhaps, unsurprisingly, he has been sectioned four times since. His ninth birthday present was a pair of red canaries and now he has a pet crow named Blyth. Unsettling stuff and highlights how the misfit will come under suspicion immediately when something bad happens.

The title is a homage to an old Robert E. Howard story but Stephen Graham Jones tells a grimmer tale with ‘Pigeon From Hell’. A babysitter fails drastically in her duty and her charge ends up dead. She has secrets to keep and keeping them takes her down ever darker roads. It’s a contemporary American suburban setting and the story was written in plain prose, think Stephen King, and perhaps had more impact thereby and it was scary.

Many moons ago, I read praise for M. John Harrison by Michael Moorcock and bought one of his books on the strength of it. I found it unreadable. Happily, I found ‘Isobel Avens Returns To Stepney In The Spring’ both readable and enjoyable. Mick Rose, called China by everyone, has a successful business delivering bio-samples. He meets plump, sexy Isobel in Stratford-On-Avon and falls in love. She dreams of flying and loves it so much she wants it to come true and starts to lose weight in pursuit of her ambition. The yearning to be a bird goes to extreme lengths. Apart from the weird aspects, this was an accurate portrayal of a modern relationship. I especially liked the description of being dumped: ‘There was a kind of soft thud inside me. It was something broken. It was something not there anymore.’

Pat Cadigan’s ‘A Little Bird Told Me’ opens with the heroine photographing a flat full of dead people. They are Cheaters, people who have dodged death, so once it caught up with them they rot quickly. In one room, she finds a parrot who has a message for Death. ‘Just tell that asshole mortality isn’t what it used to be.’ Her boss Madame Quill turns up. She ‘looks like an old lady but has more in common with a trained assassin, sans the whimsy.’ Madame works for The Continuous Realm Of All Things. This is one of those fantasies set in our world in which magical things are going on all around but we can’t see it. The heroine is invisible to most people. I enjoyed it a lot but if the heroine’s name was given, I missed it.

‘The Crow Palace’ by Priya Sharma is another homage to corvids. Julie grows up in a nice house with a big garden and a fancy multi-level bird table built by her father which is the crow palace of the title. The garden also has a pond in which mum drowned herself. Julie’s twin sister, Pippa, has cerebral palsy. I liked Julie as she’s that rare female who’s not yearning for true love and the weird secret at the heart of the story was nicely revealed. Spooky.

Most of the stories are copyright 2017 and so were presumably written especially for this anthology. Most of them are good reads in a disturbing way and some are excellent. Whereas Science Fiction has its roots in the plain-spoken pulp tradition, modern fantasy is often more literary. To use Asimov’s metaphor, it’s stained glass rather than plate glass. Some readers find this pretentious but I think there’s room out there for all kinds of glazing and I recommend ‘Black Feathers’ to fans of weird fiction. 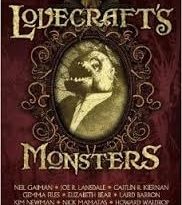