The Neal Adams cover alone for Back Issue # 45 should be its own selling point. In his editorial, Mike Eury points out that the picture was originally intended for the Warner Bros retail shops before the company dropped them. As the title says, what we have in this edition is the various odd couples in the comicbooks upto the mid-1980s. 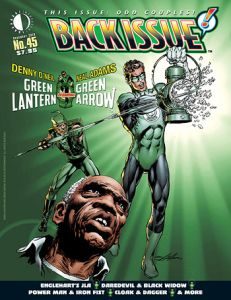 If you want to know how Luke Cage aka Power Man and Danny Rand aka Iron Fist had a reasonably successful team-up title back in the late 1970s, then read here. The remnants of blaxploitation and chopsocky made an unusual combination. Oddly, as the likes of writers Jo Duffy and Kurt Busiek wanted to keep it grounded and humorous, they were consequently over-ruled and moved on. Considering under Duffy sales of ‘Power Man & Iron Fist’ rose from bimonthly to monthly, you do have to wonder why that happened. When I read it during its day, I never considered it top tier but I also didn’t miss wanting to read it as Marvel needed a title that was grounded among the people than in super-villain territory.

I’m not sure which coupling is which when Steve Englehart was brought in to shake up the ‘Justice League Of America’. If it’s from a creator point-of-view, then Englehart had a lot of practice on Marvel’s ‘Avengers’. More likely, it is Jenette Kahn’s new editor-in-chief tenure and a need to give the JLA more depth that gave Englehart unlimited freedom in his year contract. Although Englehart still had Dick Dillon as artist, he did rise to the need. From my perspective, the JLA was always power top heavy and giving them all space problematic let alone develop their personalities together. The biggest bonus was Englehart finally giving Hawkgirl or renamed Hawkwoman membership of the JLA. With her subsequent appearances in the JLA animated series, she has over-taken her husband’s role, so when is either of them going to appear in the film franchise?

The odd team-up that wasn’t is a multi-part Aquaman story written by Steve Skeates with a Deadman back-up by Neal Adams seeing what happened from a different perspective that tidied up loose ends. This happened before I got back into reading comics in the early 1970s so gives some insight on something I’d missed.

The team-up of Daredevil and Black Widow is something I’m a little more familiar with although I do wonder what happened to Ivan Petrovich, Natasha’s protector, since her run here. In some respects, having Natasha Romanoff moving from Hawkeye to Daredevil seemed a natural progression. Unlike her codenamesake, she never left her lovers dead.

Of course, the big gubbins for this ‘Back Issue’ is a look at the Green Lantern and Green Arrow team-up by Denny O’Neil and Neal Adams. You need to get this edition for the art alone. ‘Back Issue’ at this time only had a limited number of pages in colour and there’s some beautiful portraits by Adams of the two characters. The contrast between the urban Green Arrow and the more cosmic Green Lantern, where each learnt from the other is a masterful character study and why these stories are still read today.

Following this, a look at the odd relationship of the Vision and the Scarlet Witch. Something that did make me wonder is why Jim Hammond, the original Human Torch, never had any female relationships? Considering how Wanda’s protective brother, Pietro, dominated her life, I’m surprised how anyone ever got close to her. I do wonder if writer/artist John Byrne ever liked the Vision considering he castrated the synthozoid, who is supposed to be closer to human than even the standard android. The fact that their children was a result of Wanda’s hex power was a master stroke in its day.

Finally, a look at the symbiotic relationship between Cloak and Dagger that kept the poles apart characters together and were also a grass roots pair that had problems growing away from their original intention of going after drug dealers that had mutated them. I do wonder if writer Bill Mantlo ever intended them to get their own title but it’s great to see them here.

The great joy of ‘Back Issue’ and, indeed, many of Twomorrows publications is they don’t date easily so getting their early issues for looks at your favourite characters shouldn’t be a problem. 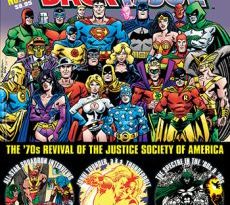 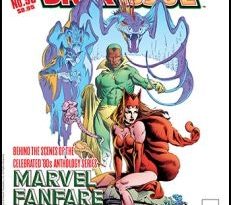