iPad mini comes with an aluminum and glass design that is 7.2 mm thin and weighs in at 0.68 pounds. It features a front-facing FaceTime HD camera and a 5 megapixel iSight camera on the back for recording still pictures and recording 1080p HD video. The iSight camera includes video image stabilization and both cameras feature backside illumination to help users capture pictures in low light. iPad mini also allows sharing of photos with friends using iCloud’s Shared Photo Streams.

iPad mini features dual-band 802.11n Wi-Fi support for speeds up to 150 Mbps. iPad mini is available in Wi-Fi + Cellular models which are world-ready with support for wireless standards, including LTE and DC-HSDPA. Its Personal Hotspot feature means you can share a cellular data connection via Wi-Fi, Bluetooth or USB with up to five other devices such as MacBook Pro, iPod touch or another iPad.

“iPad mini is every inch an iPad. With its gorgeous 7.9-inch display, iPad mini features the same number of pixels as the original iPad and iPad 2, so you can run more than 275,000 apps designed specifically for iPad,” Philip Schiller, Apple’s senior vice president told SFcrowsnest. “iPad mini is as thin as a pencil and as light as a pad of paper, yet packs a fast A5 chip, FaceTime HD and 5 megapixel iSight cameras and ultrafast wireless―all while delivering up to 10 hours of battery life.”

Many have touted the much anticipated iPad mini as an attempt to take on Amazon’s range of tablets and ebook readers… well, in everything but price! 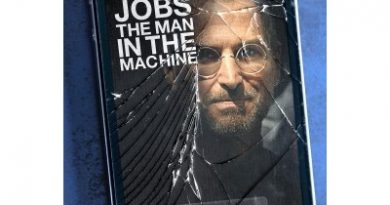 Steve Jobs: The Man In The Machine – trailer.