The cover of the latest ‘Alter Ego’ should give a good indication of the content: The All-Star Squadron! The opening interview is with comicbook artist Arvell Jones who ended up as its principle artist. Richard Arndt’s interview with Jones is rather revealing about his Detroit roots and how many creators hailed from there at the same time and were able to help him out from time to time as deadlines approached.

Roy Thomas prepped him well with a package of references although I can’t be the only one wanting to know which was the character reference lost that couldn’t appear in a famous double-pager. Considering Roy Thomas only had one clip, it couldn’t have been a really famous character but its going to leave a lot of people wondering. Jones interview is very insightful and shows the power of doing a favour. 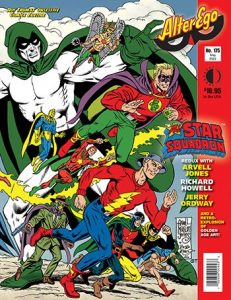 I always thought Richard Howell’s work a bit…what’s the word, solid, but reading his interview with by Richard Arndt reveals that he was brought on stop gap deadlines, even completing an issue at a convention in his hotel room than attending. Considering All-Star Squadron and Justice Society as a collective probably had more characters than the LSH, that’s a lot of work at short notice. The succeeding interview with Jerry Ordway also confirms the amount of work and he was its regular artist, not to mention the extra work for time period, only complicated when he also had to deal with Infinity Inc.

To complement all of this John Joshua introduces work he and others have does for fictional covers for what happened next to the All-Star Squadron and simultaneously give homage to other covers. I would correct one thing, the homage to the death of Professor X was from Uncanny X-Men # 43 as # 90 was the reprint and still kept the same cover.

Michael Gilbert’s ‘Mr. Monster’ continues his look at ‘Cracked Magazine’ and ‘Mad Magazine’. Talk about parodying the parodies. It also gives an argument why covers shouldn’t be over-complicated, largely I think it demands too much of someone taking it all in at a glance.

The Fawcett Collector has an article by Ger Apeldoom looking at ‘Lunatickle’ from the mid-1950s, another parody mag, showing content can be funny. Loved the French cover with the Mona Lisa as a flower lady.

As always, plenty to read. 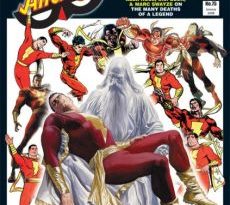 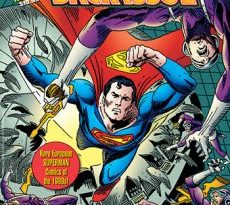