I lucked out recently and managed to get a paper copy of Alter Ego # 59 on E-Bay. Seeing the cover here, I agree with editor Roy Thomas that it is rather striking. It’s the middle section of a painting by Arthur Suydam and you can look up the complete work on-line from his zombie work. Roy Thomas says in his editorial that Suydam’s work is borderline to the time-period for ‘Alter Ego’ but felt it important as his growing up period was in his remit. Suydam isn’t just an artist but a professional musician/guitarist and only briefly accounts for this work in his field here.

Looking back 14 years, you do get a different measure of ‘Alter Ego’, where it has more of a potpourri of material. A chance to see an interview Sheldon Moldoff (1920-2012) by Shel Dorf brings light to the time period when he ghosted on Batman for Bob Kane amongst his other work at the time, including on Hawkman before WW2 although editor Sheldon Mayer wouldn’t give him it back afterwards. It’s quite interesting seeing the variety of work and styles he did. Oh, he makes an interesting point that back in the day, the artists both penciled and inked and lettered until there was a divergence in who did what factory style we’re more familiar with now.

The same could also be said for Al Plastino (1921-2013) when interviewed by Jim Kealy over on the Superman titles, although I used to wonder on whether his solid torsos were solely his or based off Curt Swan’s until seeing more of his work here shows he emulated Swan. Plastino also did cartoon work and that means I must have seen some of his ‘Nancy’ work reprinted in the UK in the 1960s.

Alberto Becattini looks at writer Jerry Siegel’s scripting in European comicbooks, including ‘The Spider’ in the UK.

Another interview by Jim Amash with Neal Adams throws more light on his work at DC Comics in the late 1960s and how he was called away from doing interior art by Carmen Infantino. I did have a chuckle at his discovery of why Mort Weisinger’s mean attitude from the man himself. It started in the morning for Weisinger looking at his face in the mirror and not liking himself. Weisinger was reluctant to use Adams for covers despite Infantino wanting him to. So Adams offered one cover to see if he liked it and the rest in history. I just wish he said which one was it.

I knew less about Fran Matera (1924-2012) but his interview by Jim Amash shows most of his work was in America and in syndicated newspaper strips that weren’t shown over here. Seeing samples of his work here, he could switch between serious and cartoon showing true storytelling quality. Like a lot of the Golden Age artists he could both pencil and ink his own worked but never liked only doing the latter. Oh, he also illustrated Doll Man.

The Mr. Monster feature runs the second part of artist Russ Manning looks at some of his early SF work and then comments on the various artists who also worked on illustrating Tarzan.

The assorted Fawcett articles includes Marc Swayze commenting he would have had Mary Marvel’s hair less lacquered had he designed her and shows some samples. Speaking of sample, P.C. Hamerlinck interviews Rubén Procopio who sculps as well as draws and his work with Jerry Ordway in creating a Captain Marvel/Billy Batson piece will show how much hard work was involved.

This issue is alas only available as a digital copy unless you get a lucky paper find on-line, but there’s a lot to read and learn here. 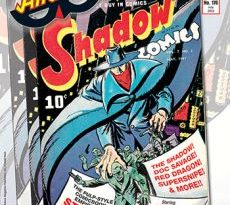 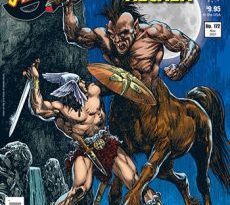