In many respects, the ‘A.B.C. Warriors’ was created on the success of ‘Ro-Busters’ that featured the sarcastic Ro-Jaws and his partner Hammerstein (which is having another release in November). Rather than dwell on that partnership, this series targeted Hammerstein when he was a sergeant in military life and capitalise on the mega-violence of when robots not humans were sent to war. Ro-Jaws appears later in these stories but this series is less about them. I haven’t read this series since it came out originally in 1977 and reading it in a collected volume with more adult eyes now and, I was hardly a teenager back then, the biggest thing that strikes me is the musical chairs of artists for each episode. When you compare to the consistency of artists staying with the other ‘2000AD’ stories at the time, it does feel like they were either over-stretched or didn’t have anyone left prepared to devote all their time to Pat Mills’ stories, said writer being the only consistent aspect. However, let’s use that aspect as a showcase comparison of art styles and point out that Brendan McCarthy’s art was far too cluttered and the rest, especially Mick McMahon and SMS, stripped that back and made the art easier to read. Anything beyond that will have to laid at Pat Mills’ feet. ‘A.B.C. Warriors’ lacked his usual deadpan satire and was devoted more to action and other than the odd quirkiness, none of the seven robot team had any standout qualities to distinguish themselves from each other. As with the artists, I couldn’t help but wonder if Mills himself was over-extending his work load at the time.

Much of the opening stories has Hammerstein assembling a team of robots for a special mission. ‘The Magnificent Seven’ it ain’t. Not even a close satire. More like getting a bunch of misfit robots together and where their programming was faulty, given new personalities. Unfortunately, this was downplayed compared to the action as they are sent to Mars to sort out a war involving evolved baboons, humans and a dose of robot dinosaurs.

The ‘A.B.C. Warriors’ was literally a continuous battle and not giving much space for personalities to develop. Even the introduction of Terri, who was a human who thought she was a robot didn’t change that. What was interesting was placing the Warriors in the same reality as Nemesis the Warlock but other than a few pictures, neither of them actually met.

My favourite story had to be with George, the giant robot with five brains who wanted to do in multiple directions at the same time and gave some heart and personality that the other characters lacked. It was hardly surprising that he joined the team.

If you ever wondered where the name Abaddon, the name of 2000AD’s parent company came from, then you’re going to have a fright with this book. Being an exterminator, he ain’t nice!

For those who don’t know, the periodic coloured pages throughout this book reflects ‘2000AD’ at the time with the opening splash coloured and the rest in black and white. I suspect somewhere down the line, there will be a volume made in full colour but here you’re seeing the ‘A.B.C. Warriors’ as it was originally seen.

I have some mixed feelings about the ‘A.B.C. Warriors’. There are more volumes to come that at least means it found a core audience but it certainly isn’t Pat Mills’ best work. He’s so good with ‘Judge Dredd’ and ‘Nemesis The Warlock’, I think we’re just spoilt with his quality. If you want to see a selection of artists for comparison, then this book more than covers this. 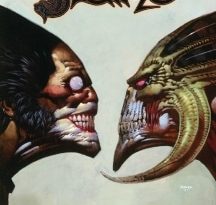 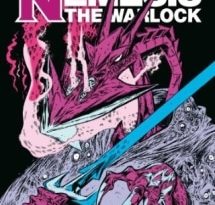 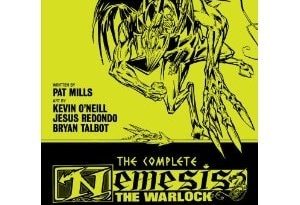 One thought on “A.B.C. Warriors: The MEK Files 01 by Pat Mills and a variety of artists (graphic novel).”