The principle plot element of season 3 of ’12 Monkeys’ is tracking down the Witness through time. It is hardly surprising that James Cole (actor Aaron Stanford) and Cassie Railly (actress Amanda Schull) are in conflict with Katarina Jones (actress Barbara Sukowa) when they realise they can’t let any harm come to their son.

Oddly, there’s a lot more humour between them which balances out, especially when Cassie is teaching Cole to dance, againt the extreme violence. Interestingly, episode 4 is where Jennifer Goines (actress Emily Hampshire) istotally crazy which is an art to itself. Alisen Down as Olivia is truly scary, more so when you reach the final episode. 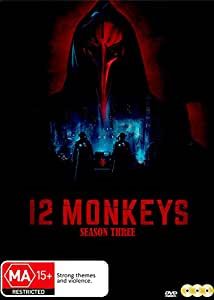 How much to say about this series without it becoming spoiler. No one is safe here and there are some surprising fatal casualties, misdirection, changes in alliances and things are not quite what they seem. In other words, everything is spoiler and will keep your eye on the screen as to what is going on. When a series can do that, then you know you have a good one.

Oddly, there are no extras, nor in the blu-ray from the looks of things, although I suspect that there was more a fear that it might upset the dark tension of this season showing behind the scenes. Season 4 only has deleted scenes from the looks of things, although I do think from a historical pov for us geeks knowing the thoughts from production and cast would have been useful for future research.

With only 4 seasons and a known time scale (sic), you would think the third season would stand still. It doesn’t but there are so many things that are spoiler it does make it difficult to discuss the story so far. There’s certainly enough surprises and splintering is no longer confined to Jones’ equipment in 2043. Just don’t be caught out if something is broken and you’re in the past.

The mask of the Witness, by the way, is derived from the Edgar Allen Poe story translated into film by Roger Corman, ‘The Masque Of Red Death’. When you make that connection, so much of the red skies and petals makes a lot more sense. 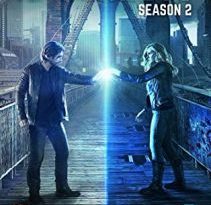 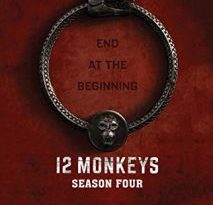