As editor Marc DiPaolo points out in his lengthy introduction to the book ‘Working-Class Comic Book Heroes’, this isn’t just about super-heroes but any working-class or ‘blue-collar’ characters in the comicbooks which raises some interesting choices as well as some odd absences.

The rich and the blue-collar interact a lot as he points out. It’s a shame that he didn’t cover the original X-Men where the wealthy Warren Worthington III aka the Angel mixed with the blue-collar Hank McCoy aka the Beast and Bobby Drake aka the Iceman. Scott Summers and Jean Grey were placed somewhere in between. There were always reminders of their different financial state throughout their original run. 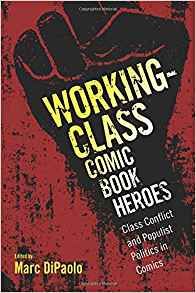 DiPaolo focuses a lot more on Ben Grimm aka The Thing’s roots but overlooks the fact that he is also a military trained pilot and his financial status must surely have changed associating with the very rich Reed Richards who financed the Fantastic Four. Granted it might not have changed Grimm’s own outlook but you can’t just stop at their childhood upbringing.

This doesn’t stop DiPaolo looking at the wealthiest Marvel characters in comparison and how much they are supposed to be worth. Oddly, he ignores Worthington, whom Drake once described as being ‘wealthier than god’ after the former’s parents had died. You do have to wonder at the personal wealth of the likes of Reed Richards and Charles Xavier fits into all of this.

It is a bit crazy comparing Marvel and DC Comics wealthiest characters indiscriminately rather than in separate realities as the latter has far more wealthier super-heroes. If anything, Marvel has a lot more blue collar or middle-class super-heroes, although you do have to wonder how the likes of carnival archer Clint Barton aka Hawkeye could finance a private lab and make so many exotic arrows.

I’m still not sure why he considers Clark Kent as a blue collar character considering as Superman he is capable of squeezing coal into diamond and has a big home in the Arctic. As a disguise, Clark Kent has to keep up the pretence in everything and even says he sends money home to his foster mum in some of the 52 DC realities. Phil Bevin’s look at Grant Morrison’s version in the ‘All-Star Superman’ illustrates a key problem as to what to do with the Kryptonian and get him involved in social issues.

I’m less sure about Blair Davis putting Luke Cage and Man-Thing in the same chapter, even if there is a dividing line. Yes, Power Man is definitely working class using his super-powers as a hero for hire back in the 1970s to make ends meet but it was never sustainable. Even when Cage had two offices for different types of client once he started associating with the rich Danny Rand aka Iron Fist, it makes such things problematic.

The American ethic has always been to making money and, the more you have, the different class of people you associate with and becomes the ambition if they can achieve it. With Man-Thing, he was more a framing device for writer Steve Gerber to build stories of mostly blue-collar people in the Everglades around than having no social class.

Matt Murdock aka Daredevil’s Hell’s Kitchen roots are well recognised. Kevin Michael Scott’s look at how Stan Lee, Frank Miller and Kevin Smith did their different takes on the Man With No Fear just establishes what we know.

It’s hardly surprising that Jack Kirby and Ben Grimm share similar backgrounds but from Andrew Alan Smith’s article, I had no idea that Kirby was such a bruiser. I was glad to see it was noted here that Grimm was university educated.

I only came across the Marvel character Molly Fitzgerald aka Shamrock briefly before I left comics in the 1990s but regarded her as a minor character amongst other minor characters provided to show international super-heroes. She also had one of the naffest costumes as illustrated in this book. Although she had more appearances after my time, I can’t see her as a typical example of working class. Marvel has a limited number of British super-heroes but other than Brian Braddock aka Captain Britain, most would be classed as coming from middle-class backgrounds.

The final chapter by Terrance R. Wandtke deals with Marvel character Jessica Jones and as I haven’t seen the TV series still don’t really know much about her until reading here. For a long while I thought this might have been Jessica Drew aka Spider-Woman. What Jessica Jones is a retroactive super-hero called Jewel who turned private detective and working hard to make ends meet. Although introduced in the Marvel MAX reality, she has transcended to its regular reality.

Although I’m not sure if the various writers here have done more than pointing out various characters backgrounds and there are more than I used as examples from the book above. I only commented on these because I had some familiarity with them. The bigger question should probably focus on why aren’t there more working class heroes?

In many respects, having wealth means you don’t have to explain job absences or where they are going to get their next meal from, although Spider-Man is a good example of that. If you’re working class then your agenda tends to be to help others or help yourself. It’s a shame that there wasn’t any exploration of the super-villains and their motivations. It might be an interesting contrast for their writers to explore the pros and cons of being a wealthy super-hero.

Despite some reservations that these writers haven’t gone far enough, this is also the first book I’ve seen on this particular subject and certainly needs more study and inspire more working class heroes. 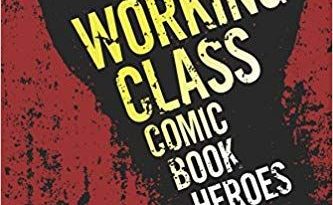