In many respects, Valerie Estelle Frankel’s book title, ‘Wonder Women And Bad Girls’ is a bit of a misnomer. However, pay close attention to the spelling. It’s ‘Wonder Women’ not ‘Wonder Woman’ as she’s only one of the 46 super-heroines and super-villainesses covered in this book’s essays, although more pop up in there so don’t take each chapter as a given as to who is covered.

She also succeeds in doing this without endless story synopsises, although the index isn’t comprehensive enough to name them all. I’m surprised the likes of Modesty Blaise, Honey West, Emma Peel, Vampirella or even Barbarella don’t get a mention as archetypes. 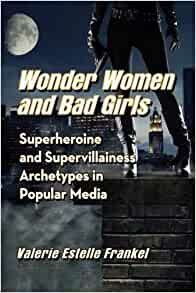 The point of this book is to show the evolution of the role of super-women or even more normal women from being support cast needing rescuing to being primary antagonists doing the battling. I agree with Frankel about the revealing costumes might being going too far, but a comment by Power Girl in one of the graphic novel reviews I did earlier in the year is she sees exposing her body offers distraction as she goes in for the attack.

I’m not altogether sure I agree with her assessment of Invisible Girl being too girly, mostly because of Fantastic Four # 5, where she took on Dr. Doom on her own and beat him. Granted, it didn’t happen often in the early days, and I suspect the Lee/Kirby combo added her ability to generate force fields to give her some offensive weapon. Hardly something you would do to keep her meek.

A lot of what I’m going to say is more to how do I react to some things Frankel says. So this isn’t a one-sided argument, be sure to buy the book. As I’ve often said, if you react to a book, then it is making you think, which is often the whole point.

The discussion on widely exaggerated breast-size and curved backs that would break if we did them in real life forgets that they are drawings designed to attract the adolescent to some extent rather than being accurate portrayals of women. When you also consider how women of all ages are affected by Photoshopped photographs of women, it shows how much of a visual orientated society we are. Whereas it’s lack of understanding of technology manipulation of photographs, illustration allows for exaggeration and, oddly, the beauty of the curved line.

Something that became more apparent while reading was her piece on Mystique was definitely focusing only on her 2000 version far more than her development. In contrast, when Frankel dealt with Kitty Pryde, she went back to her first appearances in the late 1970s. It would be difficult to cover or assess the entire history or incarnations of a single character, let alone so many, but there does need to be a check on the opening of each piece as to which time period she is addressing.

A more in-depth index would certainly have been useful to check who was in there. Even Destiny, Mystique’s friend from her version of the Brotherhood Of Evil Mutants, gets part of a chapter, although I thought Raven Darkholme had unwittingly dated a demon that ended up having Kurt Wagner for a son. Yes, Mystique can change sex, but I suspect she would have had to suspend that during pregnancy.

As I’ve commented, keep on the date of the characters and when under discussion. This version of Starfire is a lot more prone to not seeing the necessity of wearing clothes. Occasionally, Frankel explores TV and film versions of various characters, but not as a collective across the media. That’s a shame really, because a comparison between them might have explored more about the various changes over the years, especially across the media. At least she mostly avoided a mixing pot and confusing which company the various female characters belonged to.

Interestingly, she explores Michelle Pond aka The Amazing Bubbles from the ‘Wild Cards’ book series, although it’s a shame she didn’t look at a few of the others there.

When you consider that there is a large proportion of women writers in the book series, this would certainly have reflected on how they were depicted. Caroline Spector also created bubbles. Although to be fair, Frankel rarely addresses the sex of the writer associated with any of the characters, so we don’t know how well male writers are compared to female writers and what they bring to them.

There is a lot to digest in this book and there’s a fair bet you’ll be wondering who was missed out but there’s definitely done a lot of reading that Frankel carried out here so I doubt if she would want to read the entire history of the Legion Of Super-Heroes. Oddly, I was surprised she missed out on Will Eisner’s ‘Spirit’ as he had several strong femme fatales like Ellen Dolan, Silk Satin, P’Gell, Dulcet Tone and Sand Saref. Certainly, they had an influence on the female characters created afterwards.

The book’s intent is to make you think about strong female characters and their evolution. Considering I use a high proportion of female characters in my own stories, they are in good company. I think Frankel’s concentration, although certainly not all, on super-female comic-book characters is showing how far they’ve come in the past 30 years. I suspect if she had a bigger page count, she might have explored more film and TV female characters.

Don’t forget if you’re in the UK, check out the Eurospan book store rather than buy in from abroad.